Copy provided by the author in exchange for an honest review.
Jonas McCleary is an old class detective. No modern technology, no gadgets in every pocket, just his open mind and a great sense for justice. That is what makes him good at his job, catching the bad guys. So when a mourning father shows up at the door of his office, PI McCleary takes the case. His client’s son is dead. An autistic young man who never bothered anyone. A young artist who lived in his own world. A kid who never troubled anyone and never got into the fight, never lied. David Zaretsky lived for his paintings. His only passion was to paint. The father doubts the natural causes for the death of his only son, so he hires the private investigator to do some research. The investigation leads Jonas McCleary into the world of art and goes behind the scenes of the famous television shows. Soon he finds out that it is all about the show, that masks fall behind the scenes and that a whole new world arises when the red light of the camera turns off. A world where David Zaretsky doesn’t belong to, a world where he is invisible, where for the rich and famous, simply isn’t there.
This is the third book from The Jonas McCleary Series. Whenever I think of Jonas McCleary, an image of Humphrey Bogart playing Philip Marlowe pops up in my mind. It’s hard for me to imagine Jonas McCleary looking like someone else. 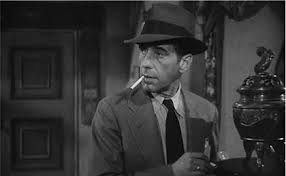 In this book, he establishes himself as a true private investigator. Following the series, we can see the big changes in his life. He moves from another town, works as a local sheriff, meets the love of his life, gets married and has two kids. The story is not just about the case, it includes his personal life. At the same time, we can see his sixth sense as a detective, and his soft side as a loving husband and father. What separates him from other detectives is not being an anti-hero, nor drug user, nor lonely man, just an ordinary former police officer with a normal personal life. It is very rare to see that these days.
When it comes to the investigation, the author is a real storyteller. He slowly introduces the reader into the case, including one character after another. The story is told from detective’s perspective, in the first person, and it always shows the character’s thoughts, emotions, doubts, and conclusions, with comical elements included. We can easily imagine ourselves sitting in the office with the detective, talking with the potential clients and solving their problems.
For the fans of classic crime noir, looking for the murderer of the kid who wasn’t there is a perfect entertainment. If you ever wondered whodunit, The Jonas McCleary Series are just for you. No sleepless nights, no locking the doors, but a perfect gray cells’ exercise with your cup of tea.
My opinion: 4 / 5.
Buy the book HERE!
About the author
0 shares