‘A dazzling crime novel that’s equal parts coming-of-age tale à la Salinger’s The Catcher in the Rye and travelogue à la Kerouac.’ PUBLISHERS WEEKLY
‘Propulsive, brutally honest and yet unexpectedly tender, Dodgers is one of the best debuts I’ve read. I was absolutely gripped by the voice, the world of East and his brother, and surprised at nearly every turn. I audibly gasped at the end.’ ATTICA LOCKE, author of Black Water Rising and Pleasantville
‘One of the greatest literary crime novels you will read in your lifetime’ DONALD RAY POLLOCK DODGERS BILL BEVERLY 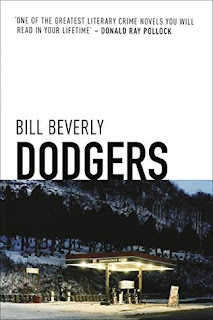 When fifteen-year-old East, a low-level lookout for a Los Angeles drug organization, loses his watch-house in a police raid, his boss recruits him for a very different job: a road trip – straight down the middle of white, rural America – to assassinate a judge in Wisconsin.
Having no choice, East and a crew of untested boys – including his inscrutable, trigger-happy younger brother, Ty – leave the only home they’ve ever known. Setting off in a nondescript blue van, with a roll of cash, a map and a gun they shouldn’t have, this amateur crew embark on a life-changing odyssey into the unknown.
Along the way, the country surprises East. The blood on his hands isn’t the blood he expects. And he reaches places where only he can decide which way to go – or which person to become.
An intense, dangerous thriller delivered with a poignancy that will break your heart, Dodgers is the American road trip for our times. From the mean streets of south LA to the hinterlands of the American Midwest, the pared down, a raw prose of Beverly’s incredible debut will keep you spellbound, shocked and thrilled to the very last page.
‘Dark, edgy and riveting and, for all that, deeply, humanly serious, Dodgers is white knuckles for the mind.’ Robert Olen Butler ‘A wickedly good amalgam of the Adventures of Huckleberry Finn and Clockers that stands firmly on its own as a remarkable debut. A harrowing road trip into the heart of America that will shock you, move you, and leave you marveling at its desolate poetry.’ Richard Lange
ABOUT THE AUTHOR: BILL BEVERLY was born and grew up in Kalamazoo, Michigan. He studied literature and writing at Oberlin College, including time in London studying theater and the Industrial Revolution. He then studied fiction and pursued a Ph.D. in American literature at the University of Florida. His research on criminal fugitives and the stories surrounding them became the book On the Lam: Narratives of Flight in J. Edgar Hoover’s America. He lives with his wife and daughter in Maryland and teaches American literature and writing at Trinity University in Washington D.C. He collects beer cans.
PRAISE for DODGERS
‘An excellent book . . . Imagine the young corner boys from The Wire on a road trip across the USA’ James Brown, Sabotage Times
‘Akin to William Gibson in its staccato blizzard of sentences, each as taut and tight as a drumhead, and reminiscent of James Ellroy in its sense of social injustice and of a life and upbringing etched caustically across the pages. A compelling debut.’ Luke McCallin, author of The Man from Berlin and The Pale House
‘Not only is the fast-paced and masterfully plotted Dodgers one of the greatest literary crime novels you will read in your lifetime, Bill Beverly has also created, in the teenage boy, East, one of the most unforgettable and heartbreaking characters ever encountered in American fiction.’ Donald Ray Pollock, author of Knockemstiff and The Devil All the Time
‘Dodgers transcends genres. Its main character East, is part Kerouac’s Sal Paradise, Part Wright’s Bigger Thomas, and even part Salinger’s Holden Caulfield. The hero’s journey is an American story.’ Ernesto Quinonez, author of Bodega Dreams
‘A terrific novel, urgent, thrilling and dangerous from start to finish. In East, Mr. Beverly has created a character who stays in the mind after the book is finished, an Odysseus straight out of Compton. His venture into the unknown lands of the American Midwest has a classic, mythic shape and scope. And the writing throughout is lovely, economical and exact. You could read this for the sentences alone.’ Kevin Canty, author of Into the Great Wide Open
‘The sentences will snare you, and the story keeps you hooked – a thrilling cross-country journey that takes on the poetry and resonance of myth.’ Adam Sternbergh, author of Shovel Ready and Near Enemy
‘In Dodgers, Bill Beverly delivers with honesty and empathy as he takes us into the hope-killing shadow of LA’s street-level drug kingdom. His prose is a perfect match for young East’s life-altering journey; spare, clear-eyed and with the cutting edge of flint. Beverly leads us into the heart of a young man molded by circumstance and, much as Richard Price’s The Whites, gives us a view that will change the way you look at the world.’ Susan Crandall, author of Whistling Past the Graveyard
‘Bill Beverly’s wild and auspicious debut takes off from page one and never lets up. Dodgers, a kind of modernized and urban take on Theodore Weesner’s The Car Thief, is lightning quick and world-wise, full of pitch-perfect dialogue and criminal misadventure. Most importantly, it’s a lot of fun.’ Tom Cooper, author of The Marauders
If you are intrigued by this amazing blurb, come back tomorrow for Chapter 1 of this terrific read!
0 shares