The Body on the Doorstep by A. J. MacKenzie
Series: Romney Marsh Mystery #1
Published by Zaffre
Published on 21.4.2016
Genre: historical fiction
Pages: 272
You can buy the book on amazon.co.uk or  amazon.com
Goodreads

Some of our friends and fellow authors who write police procedurals are frankly envious of our working in the eighteenth century. So is Marilyn’s sister, a crown prosecutor in Canada. ‘You don’t have to worry about DNA or any of the technical stuff’, she complained. ‘You’ve got it easy.’
On one level we do, and we are full of admiration for our friends who write police procedurals and other modern crime drama. To make these books believable requires a lot of technical knowledge and – even more important – the ability to make that knowledge interesting to a non-technical reader and integrate it into the story. Very impressive, you guys. Don’t know how you do it (but love the results).
Our technical problems are few and simple. If we need to know whether it is possible for someone to be murdered in a particular way, we tend to act it out ourselves. This will get us in trouble one day, as our windows face onto the village street and we sometimes forget to close the curtains. To any members of Devon and Cornwall Police who may be reading this: we really are writers, what you saw as you drove past just now was just research. Honest.
Our local police have been helpful, and a friendly forensic pathologist has given us some useful ideas, but on the whole, forensics and autopsies and the like were pretty rough and ready and modern methods are far too sophisticated for our purposes. In the 1790s, coroners and investigators used judgement and experience to determine things like cause and time of death. They knew about rigor mortis and morbidity, and were actually pretty good at determining time of death; and since the most common causes of death in our period were malaria, pneumonia, alcohol poisoning and blunt trauma, they were pretty good at recognising the signs of these too. Few people lived to a ripe old age, back then.
Nor were the smugglers and spies who crossed Romney Marsh particularly sophisticated in their methods of bumping people off. Not for them the refinements of exotic Eastern poisons, or cunningly arranging murders to look like suicide. If someone got in the way of the smugglers, they shot them or clubbed them over the head. Simple, effective, and to the point.
Occasionally, though, even these methods could lead to some puzzlement. In The Body on the Doorstep, the local doctor and assistant coroner is surprised to find that someone has been shot, not with a round ball from a musket or pistol, or buckshot from a fowling piece – the firearm of choice of many smugglers – but a bullet from a rifle. Rifles were extremely rare in 1790s England (the British army had not yet adopted rifles as an infantry weapon), and the presence of one on Romney Marsh was cause for comment.
But that was about as far as things could go. Our investigator recognised the object as a rifle bullet; but modern techniques like comparing riflings to determine which weapon had fired it were a long way in the future.
To solve the mystery, therefore, Hardcastle and Mrs Chaytor have very little in the way of technical evidence to draw upon. The only way they can go forward is to draw on the oldest police method in the book: MOM. Who had the Motive to kill? Who had the Opportunity? And who had the Means?
Sometimes, the old ways are still the best. 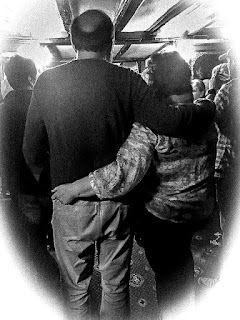 A.J. MacKenzie is the pseudonym of Marilyn Livingstone and Morgen Witzel, a collaborative Anglo-Canadian husband-and-wife duo. Between them they have written more than twenty non-fiction and academic titles, with specialisms including management, medieval economic history and medieval warfare.
THE BODY ON THE DOORSTEP is their first novel.