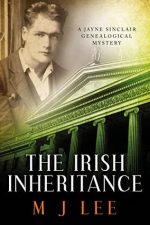 Copy provided by Neverland Blog Tours in exchange for an honest review.
Hi, guys.
Today is my stop of the blog tour for M.J.Lee’s new book. This is my third book from this author and quite different from the other two. It has mystery, it has a history in it, but also genealogy, a search for one man’s ancestors. Perfect read for history lovers.
The story starts with a murder of a British officer committed by the Irish soldiers. It continues with one soldier’s conscience and his search for British officer’s family. In those turbulent times when the Irish people are organising an uprising against the British government, the soldiers on the battlefield are proving that they are only human beings, people with feelings and fears, people who love and hate.
I am not very familiar with the Irish history. I know the basics, I know about the eternal fight between Irish and English people, but not familiar with the details. So the Irish Uprising was new information for me. It was quite interesting to read all those stories and all those history facts, seen from the view of the people who actually had to fight, not those sitting in the government’s chairs. It reminded me of another uprising that happened in my country in 1903. We are so similar.
The story continues at the present day when an American wants to find out his Irish biological parents. He hires Jayne Sinclair, former police detective, now a genealogical detective, to help him find his past. All he has is an old photograph from the time when he was sent on a boat to America from the orphanage in Ireland. What seems like a piece of cake at the beginning, turns into a life-threatening mission for the genealogy detective. Somebody doesn’t like to wake up the dead.
The Irish Inheritance is a well-written story. The author combined the two stories very well, one from the time of the Irish Uprising, the other from the present day. But, somehow, I had the feeling that the ending came too soon. With all the rush and chase I was expecting more at the end. Somehow, it ended too slowly for me. But that’s just my opinion. Overall, it is a good book. Interesting, mysterious, full of history. It presents the real people behind the war, the real life of those who survived and those who didn’t. You should definitely give it a try.
My opinion: 4 / 5.
Links


Martin has spent most of his adult life writing in one form or another. As a University researcher in history, he wrote pages of notes on reams of obscure topics. As a social worker with Vietnamese refugees, he wrote memoranda. And, as the creative director of an advertising agency, he has written print and press ads, tv commercials, short films and innumerable backs of cornflake packets and hotel websites.
He has spent 25 years of his life working outside the North of England. In London, Hong Kong, Taipei, Singapore, Bangkok and Shanghai, winning awards from Cannes, One Show, D&AD, New York and London Festivals, and the United Nations.
Whilst working in Shanghai, he loved walking through the old quarter of that amazing city, developing the idea behind a series of crime novels featuring Inspector Pyotr Danilov, set in 1920s and 30s.
When he’s not writing, he splits his time between the UK and Asia, taking pleasure in playing with his daughter, practicing downhill ironing, single-handedly solving the problem of the French wine lake and wishing he were George Clooney.