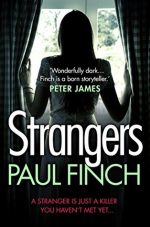 Copy provided by the publisher via NetGalley in exchange for an honest review.
Hi, guys. Today is my stop for the blog tour of the gripping read written by Paul Finch. Strangers is one hell of a read, full of adrenaline and I believe that there isn’t even a single page that doesn’t make the hair on your neck stand.
PC Lucy Clayburn has to live with the skeletons in her closet. Four years ago, a convicted murderer escaped while handcuffed to her. She almost got killed then and the entire operation failed. But Lucy loves being a copper and since then she desperately tries to prove to herself and others that she is a good cop.
And the opportunity arrives….
A man has been killed. Alone, in the woods, mutilated. The police connect the case with some previous cases where other men were killed and also mutilated. Everything points to a serial killer.
But what if the serial killer is a woman?
Lucy becomes part of an undercover operation. The team is called The Ripper Chicks. Several policewomen go undercover among prostitutes and the English underworld in order to find the person responsible for the killings. The victims are all men, so the police assume that the killer might be a woman, possibly a prostitute who offers her services to men.
Lucy Clayburn goes undercover. But nothing prepares her for the things that she is going to find among the people from the underworld.
Lucy is one hell of a character. She loves her job, loves solving the crimes and putting the bad guys behind bars. She makes mistakes, but she is brave enough to start all over again. She is a kind person, she would never ever leave someone behind or let someone be killed in order to save herself. She has some rules in her life, and she sticks to them, what makes her an amazing person.
When I started reading Strangers, I didn’t know what to expect. A serial killer, a detective, but this is more than that. The story throws you in the underworld where mafia rules, where people are killed for nothing, where there are no rules. Every page is adrenaline filled, there is a twist around every corner. Full packed with action and tension , this read won’t let you sleep at night. At least until you finish reading it.
My opinion: 4 / 5.
0 shares