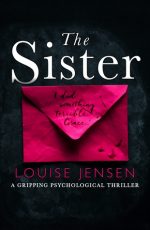 Grace hasn't been the same since the death of her best friend Charlie. She is haunted by Charlie's words, the last time she saw her, and in a bid for answers, opens an old memory box of Charlie's. It soon becomes clear there was a lot she didn't know about her best friend.

When Grace starts a campaign to find Charlie's father, Anna, a girl claiming to be Charlie's sister steps forward. For Grace, finding Anna is like finding a new family, and soon Anna has made herself very comfortable in Grace and boyfriend Dan's home.

But something isn't right. Things disappear, Dan's acting strangely and Grace is sure that someone is following her. Is it all in Grace's mind? Or as she gets closer to discovering the truth about both Charlie and Anna, is Grace in terrible danger?

There was nothing she could have done to save Charlie ...or was there?

The Sister is my very first book from Louise Jensen. I was hearing a lot about this book and decided to give it a try.

The story centers around Grace and her friendship with Charlie. There is Grace in the past when she arrived to live with her grandparents and meets Charlie for the very first time. Also, there is Grace in the present, who suffers from the loss of her best friend and tries to fix things right. Grace in the past has a skeleton in the closet and feels guilty about it. And Charlie is always there to make things easier for her. They even bury a little box to open up when they grow up. But year after year, Charlie becomes strange and distant. She also tries to find her biological father. But her sudden death stops her. Years later, Grace feels guilty for Charlie’s death and decides to do something in her memory. Grace decides to find Charlie’s father. Instead of her father, she finds her sister. A young woman who claims to be the daughter of the man who is Charlie’s father. Grace welcomes her into her home and tries to find in her the sister she lost when Charlie died.

But is Ana the person who she claims to be? Is she really Charlie’s long lost sister and can she replace her in Grace’s heart? What are her true intentions?

The two stories of Grace are well mixed and well-incorporated one into another. Step by step, the author reveals the reason for Grace’s depression and the reason for Charlie’s sudden death. The story was thrilling and kept me up till the very last page. I wanted to find out what really happened.

But I’ve found two things strange: Grace feels guilty about anyone and anything, and when the true identity of Ana is revealed, the reason why she isn’t with her real family. I didn’t find much sense here, but overall, it didn’t bother me to like the story. There were moments when I felt sorry for Grace and must say I wouldn’t choose her as my favorite character.

Overall, The Sister is a good psychological thriller and the author did a good job. Considering it is her debut, she had a great idea and she connected the two stories very well. I liked her writing and I expect to read more of her storytelling in future.