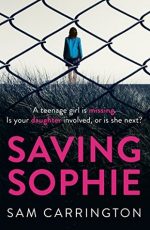 Source: Won
The story starts with a teenage girl coming home brought by the police. Sophie has no memory of the previous night and has a hangover. But very soon there is news about one of her friends dead. Killed. Murdered. Making things even more strange, there are emails with photos on her phone. Photos of her friend ‘s body, photos of herself in the same room. Is she involved in her friends’ murder?
Sophie’s mother is very worried about her daughter. Karen suffers from agoraphobia and is too afraid to go outside the house. She feels that way since she was attacked by a serial rapist in her own car. Nothing is same since then.
The story is told from three points of view. Sophie’s, Karen’s and DI Wade’s. Sophie has her own view, being a seventeen-year-old, her mother who suffered an attack has her own fears for her and her child, and the detective has a unique case to solve. No one is talking, no one is telling the truth, everyone is hiding something.
Is it over with that murder? Or there are more to follow? Is it some kind of personal revenge or is it a serial killer. And why is Sophie followed? Is she the next victim?
Sam Carrington is a brand new author and this is her first book. She has written a unique plot that ends in a very unexpected way. Every page there is new turn-over that takes the reader in a different direction. I liked the writing and liked the characters. We can see the personality of every character, their psychological description and their feelings are written very carefully and with plenty emotions. And most of it, I liked the way the story ended, it left me with my jaw dropped. I definitely didn’t expect that kind of ending. Very good job for a debut author!
My opinion: 4 / 5.
0 shares