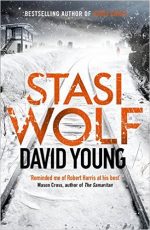 Today, I have the honour to host David Young, the author of Stasi Child and Stasi Wolf. He shares his awesome experience about the transformation of an old Wartburg into an East German police car. A perfect reading story for the fans of old cars, police cars, and thrilling stories as well.

I’ll be leaving the blurb as well as buying links bellow. Also, I’ll share my review very soon, but for now, I’m leaving you with David and his East German police car. If you would like to see the car, here is the schedule for the show. 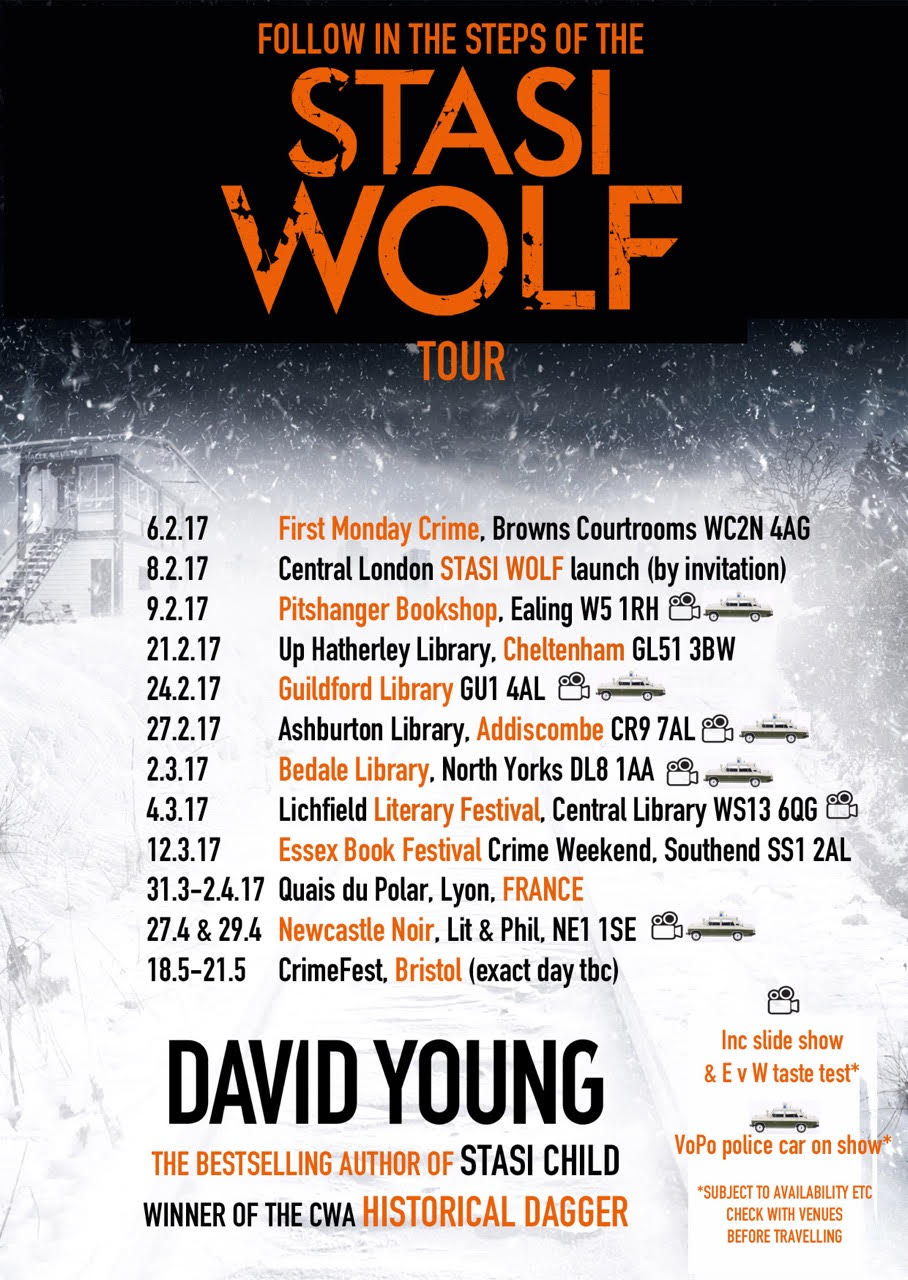 Enjoy! Oh, and don’t forget to visit the other blog tour hosts for more awesome stories from David!

My route to becoming an author began on the City University London Crime Thriller MA where I wrote Stasi Child – the prequel to Stasi Wolf – as part of an attempt to escape an increasingly frustrating day job as a news editor with the BBC.

One of my fellow students was a car buff, and would be constantly pulling up colleagues for various mistakes they’d made about vehicles they’d included in their sample chapters as we worked through them in writing workshops. But I escaped unscathed as he knew precious little about the East German Wartburgs and Trabants peppered throughout my prose.

Up to now, my car research has been confined to the internet, and although I’ve spotted plenty of Trabis and Wartburgs in the wild during research trips in Germany, I’d never driven one. Even the non-moving Trabi in the DDR Museum on the banks of the Spree – which you can apparently sit in and ‘drive’ as a video of various passing concrete high rises gives the impression of a moving car – was out of action when I visited, and I didn’t really fancy what seemed like an over-touristy Trabi safari through Berlin’s busy streets.

So my impressions of the Wartburg 353 Müller and Tilsner drive, and the Trabant their forensic officer Jonas Schmidt prefers, had been entirely fictitious and based on no practical experience whatsoever.

But now I’ve taken the plunge and actually purchased an East German car myself in order to promote the series at author events. On a dull, cold November morning I got up at some ungodly hour to catch a flight from Luton to Edinburgh where I was met in the 1972 white Wartburg 353W Tourist that I was planning to buy from an enthusiast near Falkirk.

The car was a runner, with an MoT, which is what I – as a total non-mechanic – needed. And its off-white, almost ivory colour was exactly the right shade for the top half of a 1970s Volkspolizei squad car (they changed to a brighter white in the 1980s). After a quick tour we did the deal for what I felt was a very fair £1650.

As I set off towards the motorway, I suddenly had my doubts. I’d been to a garage to fill up with the 40:1 two-stroke mixture, and it seemed as though the car was struggling – belching out smoke, and going slower, rather than faster. I was convinced my journey was going to end in a couple of miles’ time on the hard shoulder.

I should have had more faith! The car soon picked up speed, and I completed the 400-plus mile drive to my lock-up near Heathrow airport in about 8 hours 30 minutes, cruising most of the time at around 70mph.

Over the last few weeks I’ve been trying to complete its transformation into an East German police car.

The first job was sourcing the correct font. I chose Engschrift, which has a nice German look, and then fattened it down slightly, and tried to kern the letters in the weird non-symmetrical way they are on originals. The ‘star’ Volkspolizei logo can be found easily enough on the internet, and there are plenty of cheap printing companies who will then print these out on a transparent backing.

The major outlay so far has been the partial respray of the lower body in olive green which cost £800. 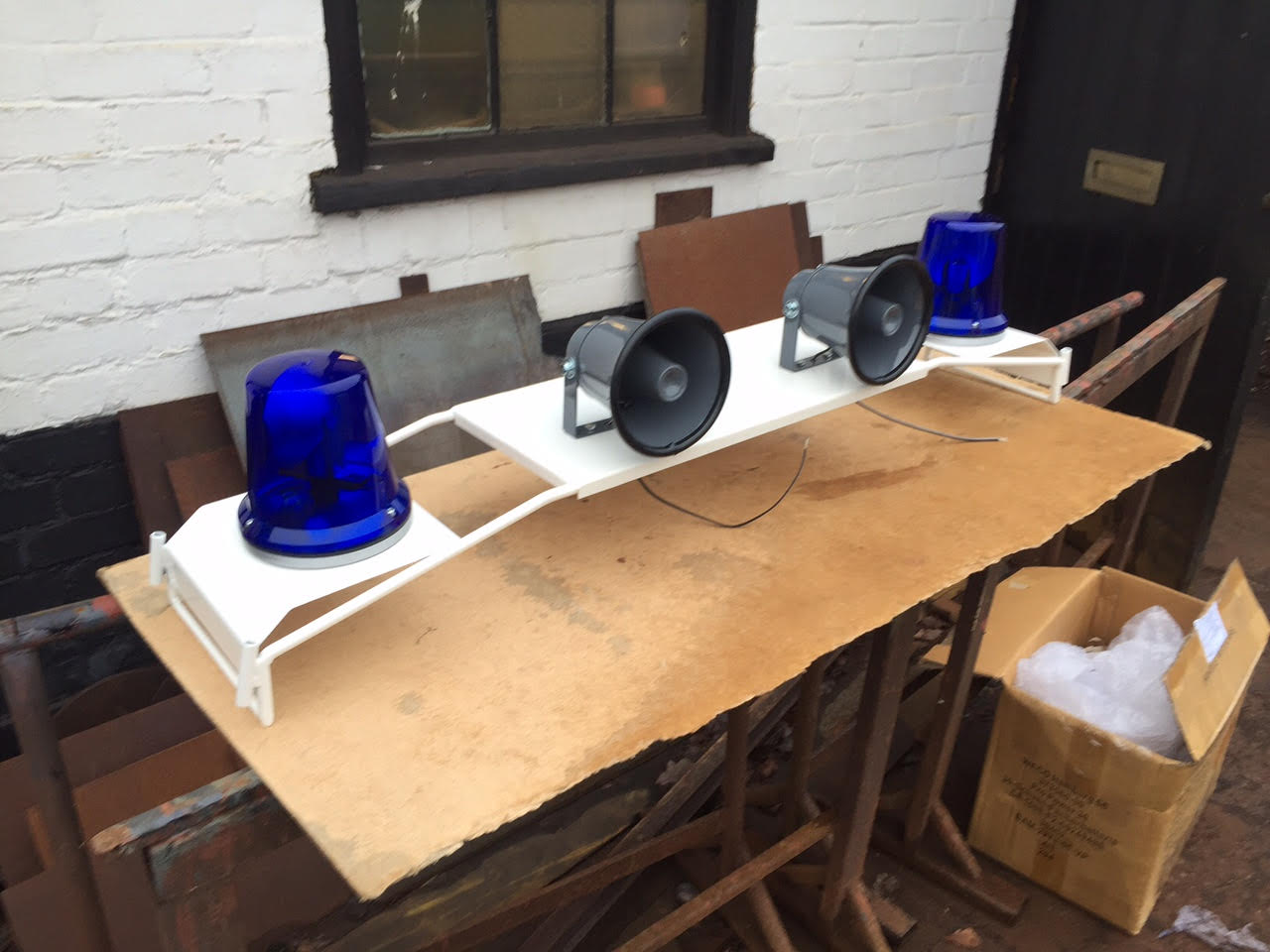 The crowing glory – just completed – is the ‘blaulichtbrücke’, or blue-light bridge, a sort of small metal roof rack construction with platforms for rotating blue lights, loudspeakers and siren. The car will, of course, only ever be a replica, but I think it already looks the part and the blue lights (the genuine article, bought from Germany) and loudspeakers should be the icing on the cake. I’m now ready to go out on tour – so look out for an East German police car coming to a street near you soon! 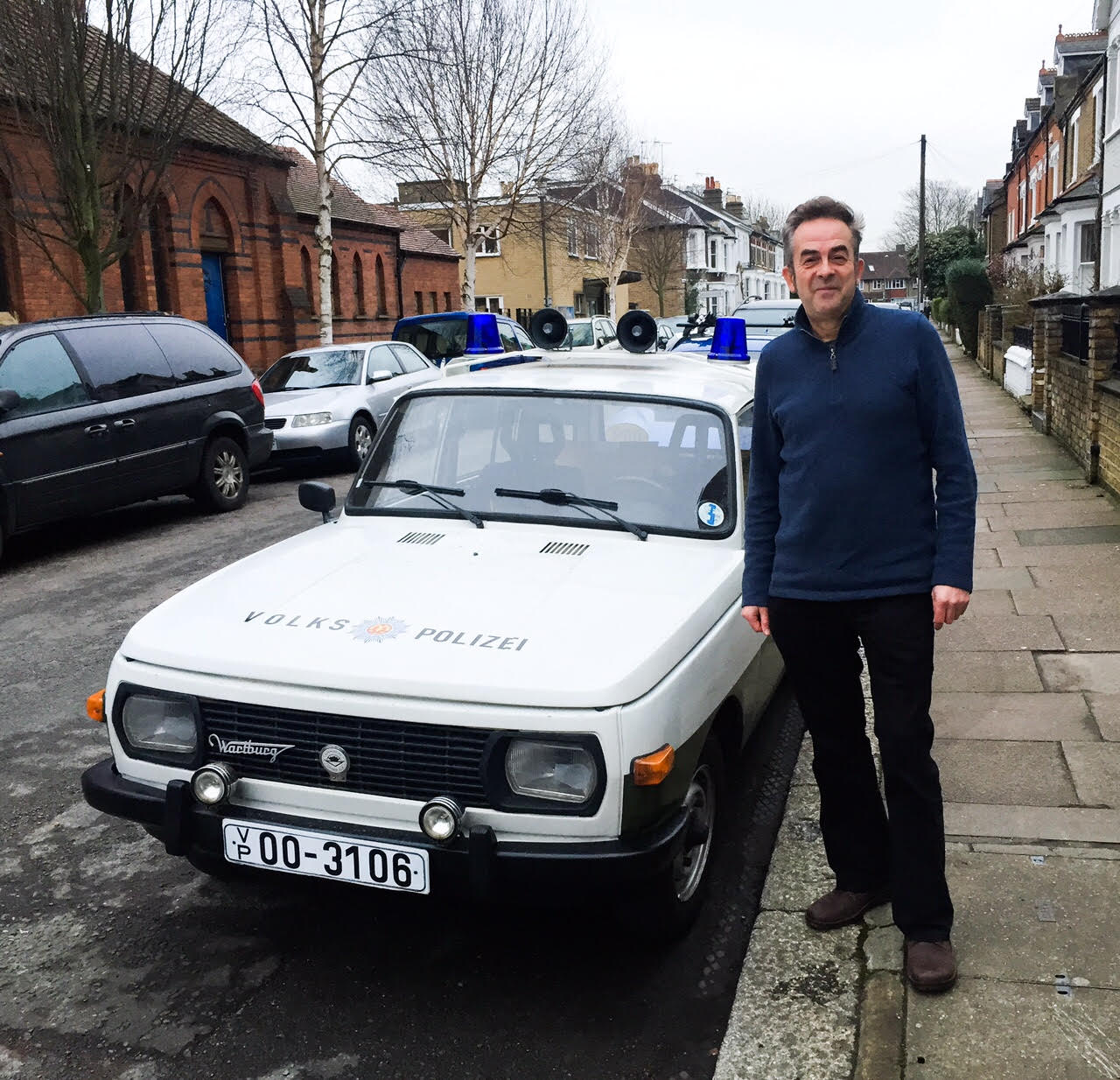 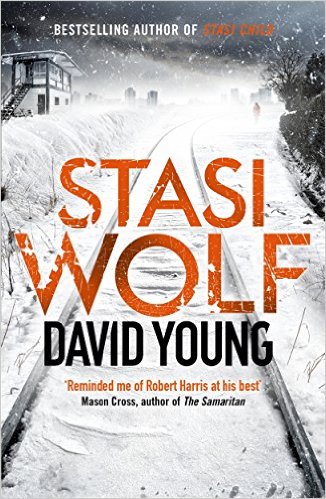 How do you solve a murder when you can’t ask any questions? The gripping new thriller from the bestselling author of Stasi Child.

But Müller soon finds her problems have followed her. Halle-Neustadt is a new town – the pride of the communist state – and she and her team are forbidden by the Stasi from publicising the disappearances, lest they tarnish the town’s flawless image.

You can buy Stasi Wolf on Amazon.com and Amazon.co.uk. 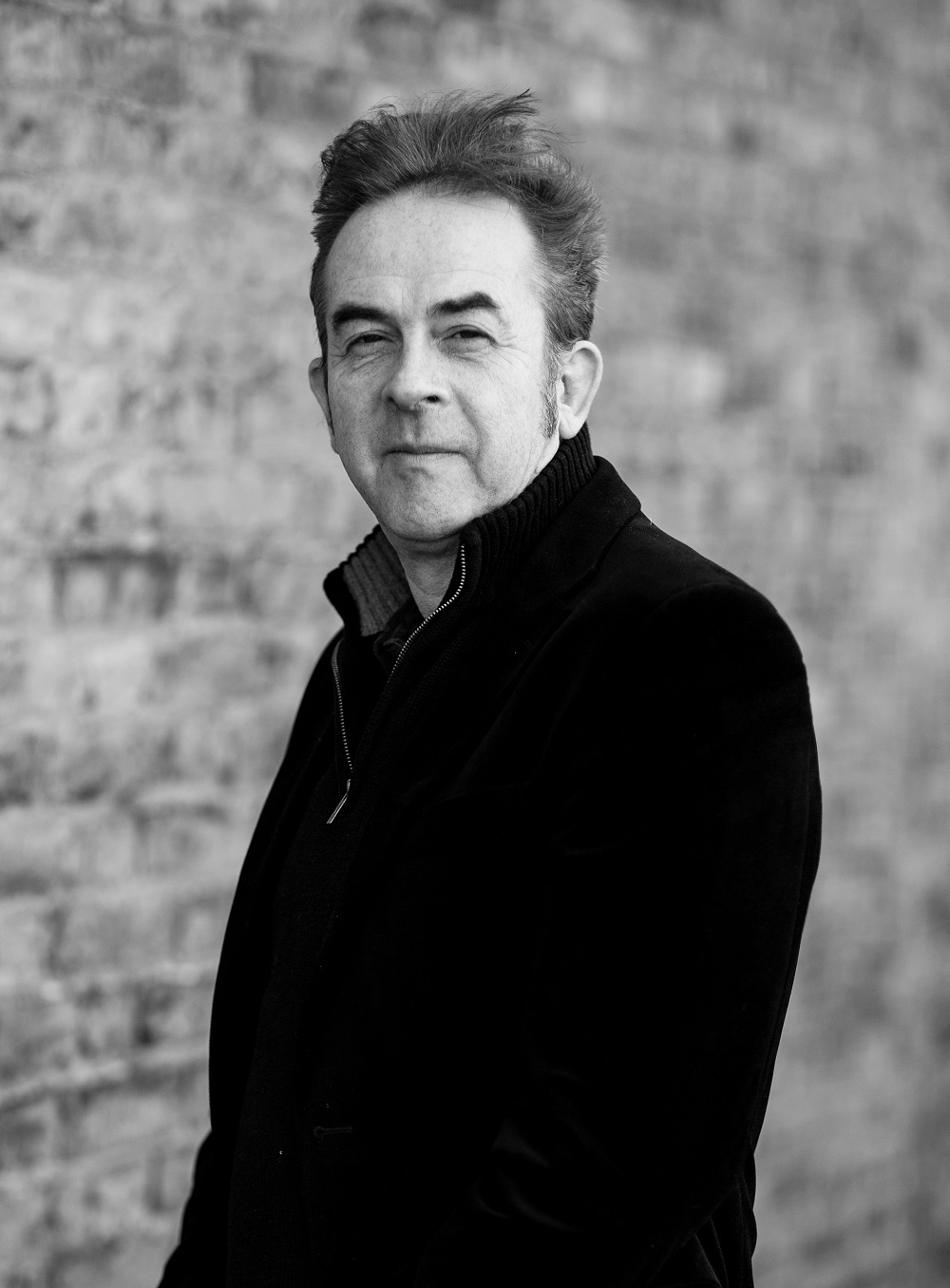 David Young was born near Hull and – after dropping out of a Bristol University science degree – studied Humanities at Bristol Polytechnic specialising in Modern History. Temporary jobs cleaning ferry toilets and driving a butcher’s van were followed by a career in journalism with provincial newspapers, a London news agency, and the BBC’s international newsrooms where he led news teams for the World Service radio and World TV.

David was a student on the inaugural Crime Thriller MA at City University – winning the course prize in 2014 for his debut novel Stasi Child – and now writes full-time in his garden shed. In his spare time, he’s a keen supporter of Hull City AFC.

Stasi Child is the first of three books in the Oberleutnant Karin Müller series – set in 1970s communist East Germany – bought by the UK arm of Swedish publisher Bonnier by former Quercus CEO Mark Smith. It reached the top 5 bestsellers on Amazon Kindle, was number one bestseller in Amazon’s Historical Fiction chart, and has been optioned for TV by Euston Films (Minder, The Sweeney etc). Translation rights have so far been sold to France.