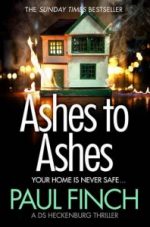 Happy Easter Holidays! I hope you had a great time. And what’s better than to start the week with a magnificent piece of art? Today I have the honour to be part of the Blog Tour of latest Paul Finch’s book, Ashes to Ashes. Here, he writes about what is like to write thrillers, when he originally writes horror. Very interesting subject! So, be my guests and enjoy his guest post. And don’t forget to read Ashes to Ashes, it’s amazing! Enjoy!

One question I’m often asked: ‘What is it like writing thrillers, when you originally wrote horror?’

Well, the most honest answer is that – from my perspective, at least – there isn’t a great deal of difference between the two.

The two genres are certainly packaged differently by publishers, and as such are perceived very differently by the public. But from a purely technical point of view – i.e. speaking as the guy who produces the actual text – I don’t consider them to be worlds apart. I think that’s primarily because, for me, dark fiction is dark fiction. What I mean by that is I’m still trying to hit roughly the same targets whether I’m writing horrors or thrillers.

Now, there’s no doubt that the basic subject-matter is different. In thrillers, we tend to be dealing with human adversaries, and while human adversaries are not unknown in horror, the latter also allows for the weird and fantastical. In contrast, it rarely works in crime thrillers than you can get away with supernatural explanations, though some authors have done it, and very effectively indeed. But that apart, I still think the two forms are similar beasts.

There are no hard rules here, of course – it’s just a personal viewpoint, but I think you can see from this that there are many similarities.

All us purveyors of dark fiction want to shake our readers up, want to disturb them, want to take them to bad places but from the complete safety of their armchairs. And I think there have been many successful novels, not to mention movies, that have combined both horror and thriller tropes in their efforts to do this. Off the top of my head, here are just a couple:

Ritual by David Pinner (1967) sees a lone cop travel to a remote Cornish community while looking for a missing child, and it isn’t long before he starts to suspect that he’s among diabolists and that a human sacrifice is planned. Most people will recognise this as the original outline for The Wicker Man, the movie version that was filmed five years later. Both versions are these days classified as horror, but they could just as easily be crime thrillers – there is no tangible evidence in either that witchcraft works, there is no demonic manifestation. Yet both book and film share this impending air of dread and evil, not to mention strangeness, though it’s a strangeness concocted by the warped beliefs of disturbed and deluded individuals.

Look at the novel, Misery (1987), an incredible piece of work by the master of horror literature, Stephen King. For those who haven’t read it, or seen the film, it focusses on a successful writer who crashes his car in a snowstorm, and is rescued by an obsessive fan, who then takes him to her isolated home, superficially so that he can recover in comfort, but in reality so that she can force him to write a book she wants rather than one he wants. It’s a terrifying tale, incorporating some scenes that are almost too awful to contemplate, but even though it was penned by horror maestro King, it could just as easily be regarded as a thriller. There is nothing supernatural in it, there is nothing that couldn’t happen in our world.

And maybe that’s a very important detail for me. Because, when I was purely writing horror, if ever I was interviewed about it, I repeatedly said that my baseline was to produce stories that could be happening in the next street to my own. Now okay, I’m not pretending that I didn’t occasionally deal with unearthly things, but an authentically real environment was essential. And increasingly, as my horror writing progressed, I found myself dealing more and more with human antagonists. Even if they weren’t necessarily the main threat in the story, I ever-more-frequently began to introduce serial killers, cultists, hitmen and the like.

As such, around 2012, when I wrote my first Heck novel – STALKERS – and I made what I suppose was my big sideways shift into full-time thriller writing, it didn’t seem like such a wrench for me. Even now, seven published crime novels later, I still write about dark cities, derelict buildings, secret organisations, masked killers, rampant insanity, and a world so morally bankrupt that it has literally degenerated into a place where you’re either a predator or you’re prey.

I know I lay this on in my crime novels, and in some corners it’s drawn a bit of criticism – I’ve been told it’s too intense, too grim, too violent. But the truth is that I don’t care. At the end of the day, as I say, I’m still writing dark fiction. I like putting my characters, and therefore my readers, through the eyes of needles, pitching them into hellish situations, confronting them with villains so wicked that its scarcely believable they could exist … but they do, because as I say, I’m writing thrillers now, not horror.

Just as a quick illustration of this, when I first wrote STALKERS – in which Heck investigates a so-called ‘rape club’, a crime syndicate who, for big-paying clients, will acquire victims of their choice, and then provide private areas where said clients can do whatever they want to these victims – I did wonder if I was leaning too much into deranged nightmare and not enough into reality. And then the whole sex-slavery thing exploded in our midst, stories about people held in cellars and in broken old freezers, used as sex-toys, raped repeatedly, before being killed and tossed away like rubbish, and I realised that I was only scratching the surface of what humanity is actually capable of.

In conclusion, I don’t think the horror has really left my work. Okay, I do not write horror novels specifically any more, but that’s as much, I suspect, because thrillers have caught up with them in terms of the vicious human devilry they can and do portray.

Okay, it won’t be to everyone’s taste, I know that. But hey … I’ve had few complaints. 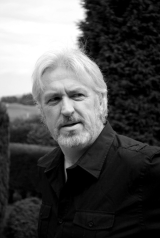 Paul Finch is a former cop and journalist, now turned full-time writer. He cut his literary teeth penning episodes of the British TV crime drama, The Bill, and has written extensively in the field of children’s animation and for Dr Who.

However, he is probably best known for his work in thrillers, crime and horror. His best known work to date is the five-novel DS Heckenburg crime series, the first three titles of which all attained official ‘best seller’ status.