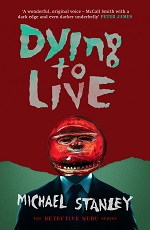 When the body of a Bushman is discovered near the Central Kalahari Game Reserve, the death is written off as an accident. But all is not as it seems. An autopsy reveals that, although he's clearly very old, his internal organs are puzzlingly young. What's more, an old bullet is lodged in one of his muscles ... but where is the entry wound? When the body is stolen from the morgue and a local witch doctor is reported missing, Detective 'Kubu' Bengu gets involved. But did the witch doctor take the body to use as part of a ritual? Or was it the American anthropologist who'd befriended the old Bushman?

As Kubu and his brilliant young colleague, Detective Samantha Khama, follow the twisting trail through a confusion of rhino-horn smugglers, foreign gangsters and drugs manufacturers, the wider and more dangerous the case seems to grow. A fresh, new slice of 'Sunshine Noir', Dying to Live is a classic tale of greed, corruption and ruthless thuggery, set in one of the world's most beautiful landscapes, and featuring one of crime fiction's most endearing and human heroes.

Hello, my friends. This time I have the honour to review another kind of crime fiction, Sunshine Noir. It is the opposite of Nordic Noir, instead of ice north, the plot is set in sunny Africa. It is my very first time to read a crime book plotted in Southern Africa, in Botswana actually, and I am pleasantly surprised. I know very little about  Botswana and Kalahari and the Bushmen, but I enjoyed this book very much. I know you’ll enjoy as much as I did.

In the middle of Kalahari desert, a body of a Bushman has been found. It is not very common to see an old Bushman with grey hair, they mostly die young. But the autopsy reveals something strange, the Bushman has organs of forty-something-years old man. How is that possible?

Detective “Kubu” Bengu works on the case. In the same time when the body has been found, a local witch doctor disappears. A doctor famous for his mutu, a drink made of herbs and organs that promises better health. Human organs are used very often for the preparation of mutu, illegally of course, and the witch doctors promise eternal life. Detective Kubu knows that those things are nonsense, but how to explain the old body, but young organs of the Bushman?

Kubu’s adopted four-years-old daughter is HIV-positive and her condition is getting worse. No medications seem to help. Kubu’s wife wants to try everything. And by everything, she means everything, including magic. Can mutu save her life?

Sunshine Noir is my new favourite genre!  And detective Kubu is my new favourite detective. I loved him as the main character. I also loved his co-worker Samantha, smart and hard-working young woman, the only woman in the police department.  I really enjoyed reading about African culture, Kalahari desert and Bushman traditions. People’s names were new to me, but that didn’t stop me from enjoying the story. Murders, smuggling, witchcraft, this story has it all. There are new mysteries on every corner and I don’t wanna reveal more. If you want to try something new, Sunshine noir is the real thing. Detective Kubu’s adventures are totally recommended! 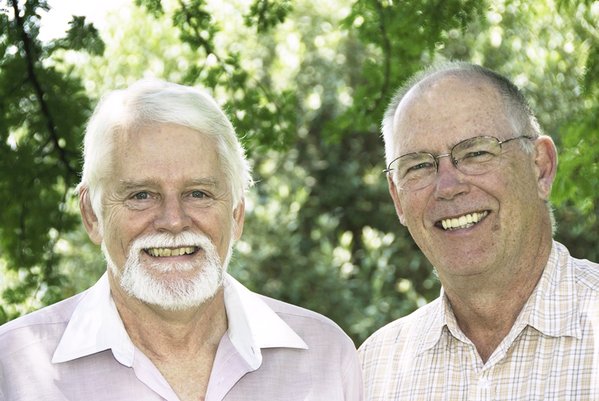 Michael Stanley is the writing team of Michael Sears and Stanley Trollip. Both were born in South Africa and have worked in academia and business. On a flying trip to Botswana, they watched a pack of hyenas hunt, kill, and devour a wildebeest, eating both flesh and bones. That gave them the premise for their first mystery, A Carrion Death, which introduced Detective ‘Kubu’ Bengu of the Botswana Criminal Investigation Department. It was a finalist for five awards, including the CWA Debut Dagger. The series has been critically acclaimed, and their third book, Death of the Mantis, won the Barry Award and was a finalist for an Edgar award. Deadly Harvest was a finalist for an International Thriller Writers’ award, and book 5, A Death in the Family, was an international bestseller.