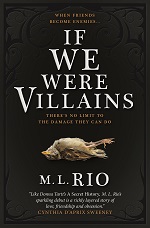 If We Were Villains
M.L.Rio
thriller
Titan Books
June 13th 2017
E-book
429
Copy provided by the publisher in exchange for an honest review.

Oliver Marks has just served ten years for a murder he may or may not have committed. On the day of his release, he is greeted by the detective who put him in prison. Detective Colborne is retiring, and he wants to know what really happened a decade before.

As a young actor at an elite conservatory, Oliver noticed that his talented classmates seem to play the same characters onstage and off – villain, hero, temptress – though he was always a supporting role. But when the teachers change the casting, a good-natured rivalry turns ugly, and the plays spill dangerously over into real life.

When tragedy strikes, one of the seven friends is found dead. The rest face their greatest acting challenge yet: convincing the police, and themselves, that they are blameless...

Hello, my friends! This time I have another review! I am pretty much sure that all those who love Shakespeare will also love this book. Imagine Shakespeare drama in real life. That was exactly what happened to the main character Oliver Marks.

The story starts with Oliver Marks coming out of prison. He has just served ten years of his life for a murder of his best friend. After ten years he comes back to the place where it all started… And he starts his story…

Ten years ago, it all started in Dellecher Classical Conservatory. Drama students of the fourth year were playing Shakespeare. Each student had a character just like Shakespeare’s characters. There were villains, heroes, temptresses. They were more than colleagues. They were family. And they were breathing for Shakespeare. Parts of his plays were recited all the time, for every occasion there was a quote from Shakespeare. And then the teacher decided to change the casting. A villain became a hero, a hero became a villain. The family wasn’t a family anymore, the characters became enemies. Some of them simply were not ready to become someone else. Hidden skeletons started to show up, true characters rose from the deep. One person became too violent. And then, he was found dead. Drowned in the nearby lake. No one had seen a thing and everyone knew everything. No one was there but everyone was involved.

Was the drowning of the student accident or attempted murder? Or maybe a suicide? Seven people were involved.

Who would take the blame?

Through the story of Oliver Marks, we go back ten years ago when it all started. He tells the story from the very beginning to his last day in prison. Is he the real culprit or he just took the blame for someone else?  Who was more important to him than his own freedom? What really happened ten years ago? Who was the real villain?