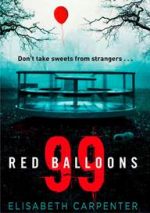 today’s my stop on Elisabeth Carpenter’s blog tour for her debut ‘99 Red Balloons’ and I have #Exclusive #Excerpt of her book on the blog today. I’ll be reviewing Elisabeth’s debut soon (which is a real bargain at the moment at just 99p for the kindle, and I definitely recommend it) and I’d like to say MASSIVE THANKS to lovely Sabah from the AVON UK team. And make sure you follow the other tour hosts for more content and more from the story. Happy Monday and wish you all a fab new week! 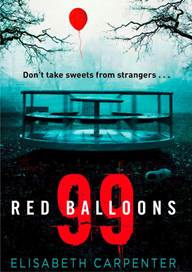 I can see the venom in his eyes as he looks at me. When he shifts his gaze to Nadia, his expression softens.

I’m shaking as I walk back to the kitchen and sit at the table next to Emma.

‘What are you looking at?’ I say to her.

She glances at me as though I’m a nuisance. Did she hear what just happened? Her eyes are bloodshot and there are tiny red blisters under them.

‘That psychic on Grace’s page on Facebook. I’m doing some research on her.’

‘Oh.’ I relax a little into the chair. ‘I didn’t know you knew your way around Facebook.’

‘Just because you don’t see me on the laptop at home, doesn’t mean I don’t use it all day at work.’

I should’ve realised – she’s on a computer all the time at the recruitment agency. She didn’t look at me when she spoke, but paranoia tells me that there was an undertone. What else has she been hiding from me?

‘I’ve got to keep an open mind about these things,’ she says.

She tuts. ‘My daughter is missing, Stephanie. Wouldn’t you consider every possibility if it were Jamie?’

‘Of course. I’d consider every possibility for Grace too.’

She glances at me and purses her lips. It’s her way of saying we’re friends again.

‘Bring your chair nearer to me. You can help me look.’

She clicks onto Deandra Divine’s Facebook page. I say nothing about the name. The profile photo is what I expected: a black and white shot of a woman in her fifties, black straight hair framing her face in a centre parting, her gaze off camera. Emma and I would have laughed at it any other time.

‘I’ve read about other missing person cases she’s given readings about, cases from years ago. She’s been right most of the time.’

If she were the real deal, surely she’d be right all of the time. It’s a thought I keep to myself.

‘I’ve emailed her, Steph. If I manage to get an appointment with her, will you come with me?’

I pause for a second. ‘Of course.’

I couldn’t relax until Jamie was back from school. I didn’t know how long it would take him to get here. At home he’s usually back at 3.45 p.m., but I booked him a taxi to pick him up – no doubt he was mortified in front of his friends – and he didn’t arrive until 3.55 p.m. In those ten minutes I experienced only a fraction of what Emma and Matt are going through. He’s upstairs in his usual place now, in the spare room.

Mum is still hovering over Emma. It’s her way of dealing with things beyond her control. I can tell that she’s been crying because she spent ten minutes in the bathroom and the rims of her eyes are still red. I don’t say anything. I never do. Once you start talking about feelings from the past, there’s no way of forgetting them again.

When Dad died four years ago, she baked and cooked for twelve hours solid until she collapsed on the sofa at three o’clock in the morning. She would never let us see her cry. She tried to hide the noise in their – her – bedroom by putting the television on loud. Emma and I would sit at her door, both too afraid to open it.

It had all happened so quickly. Emma and I had been at Mum and Dad’s house when the phone call came. ‘You need to come to the hospital,’ said the woman on the other end of the line to Mum. ‘It’s your husband. He’s been in an accident.’

‘What do you think it means?’ Mum asked in the car on the way there. ‘Why didn’t your dad speak to me himself?’

Emma sat next to me in the passenger seat as I drove us there. While Mum spoke, Emma and I kept exchanging glances; I think we both knew what we were about to hear without us saying it aloud.

When I pulled up into the hospital car park I experienced a sense of doom – that I was walking into another life, another chapter. It was a feeling strangely familiar, like I’d been expecting it without realising.

The police officer was waiting for us in the relatives’ room. He already had his hat in his hands.