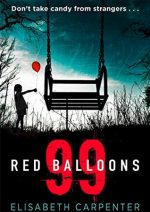 Two girls go missing, decades apart. What would you do if one was your daughter?

When eight-year-old Grace goes missing from a sweetshop on the way home from school, her mother Emma is plunged into a nightmare. Her family rallies around, but as the police hunt begins, cracks begin to emerge.

What are the secret emails sent between Emma’s husband and her sister? Why does her mother take so long to join the search? And is Emma really as innocent as she seems?

Meanwhile, ageing widow Maggie Taylor sees Grace’s picture in the newspaper. It’s a photograph that jolts her from the pain of her existence into a spiralling obsession with another girl – the first girl who disappeared…

Grace is only eight years old. She has just started to earn her parents confidence in her to come home from school by herself. The candy shop just around the corner is her favourite stop. But one day she never comes home. Her parents are devastated. The entire neighbourhood is in the search for the little girl.

In the meantime, family secrets arise on the surface. Grace’s mother is on the edge of her nerves. But it seems that there is more than a friendship between Emma’s husband and her sister. Is there a hidden affair?

An old widow is grieving alone for her daughter and granddaughter. Her granddaughter has disappeared many years ago. Soon after the disappearance, the marriage of her daughter is falling apart and she kills herself. But a recent photo of missing Grace with her family in the newspapers triggers something familiar. Someone looks exactly like her longtime lost daughter. Someone who has the same age as her granddaughter if she was alive.

A little girl is being trafficked in a car. A little girl is told a lie that her mother is waiting for her in a new home. The little girl doesn’t know the man who is driving her. All she remembers is the song “99 Red Balloons” playing on the radio.

A child missing is everyone’s worst nightmare. The author tells the story from different perspectives and creates some very shocking twists. Elisabeth Carpenter has written a psychological drama that kept my hair stand on end. She wisely connects three different stories into one.  As a reader, I assumed the connections, but boy, I wasn’t even close! Nothing could prepare me for the outcome!  It was hard for me to believe this was a debut for this author! Highly recommend for all thriller and psychological drama fans!