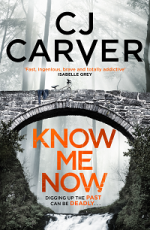 A SUICIDE.  A MURDER.  A CONSPIRACY.

A sixty-five-year old man dies of a heart attack.

Dan Forrester, ex-MI5 agent, is connected to them both.

And when he discovers that his godson and his father have been murdered, he teams up with his old friend, DC Lucy Davies, to find answers.

But as the pair investigate, they unravel a dark and violent mystery stretching decades into the past and uncover a terrible secret.

A secret someone will do anything to keep buried . . .

Today I have the pleasure to take part in CJ Carver’s blog tour for her latest gripping thriller, Know Me Now. Know Me Know is going to be published on 14-th December in Ebook. Today I have an exclusive extract from this gripping thriller just for you. Many thanks to lovely Emily and the amazing team at Bonnier Zaffre for the chance to be part of this blog tour. 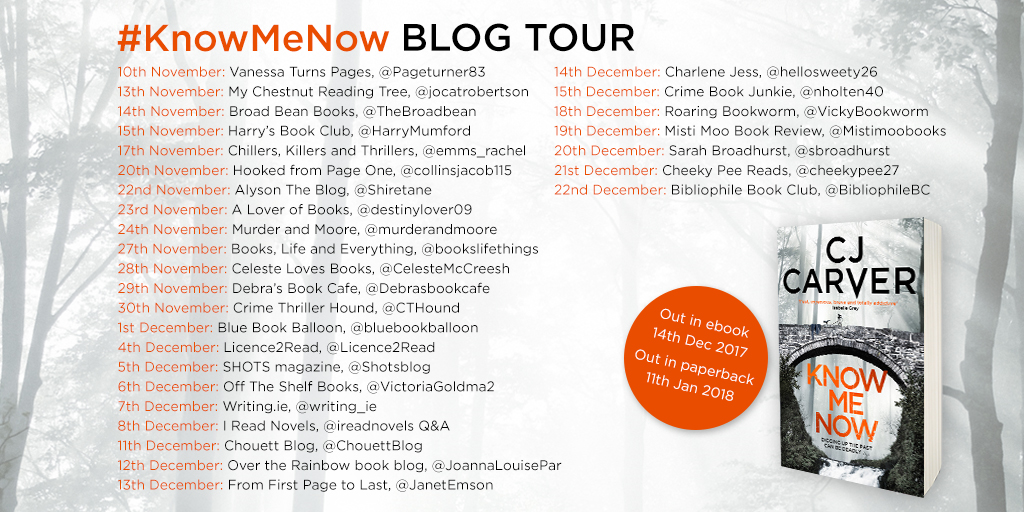 She was stepping out of the pub door. If he hadn’t looked in that direction at that precise moment he’d never have spotted her. Today she wore a blond wig and a big blue baggy sweater over faded jeans. She looked much younger, almost in her teens, which he guessed was the idea. He recognised her by the curve of her face, the lightness of her step. He was glad he’d memorised her so well all those days ago.

He stared at the space she’d vacated. She had to have followed him here from his house.

She knew where he lived.

Pushing his food aside, Dan sprang to his feet, grabbed his father’s laptop and shoved it inside his satchel. Slinging the satchel across his chest he ran for the door and yanked it open.

An icy wind snatched at his hair as he walked quickly through the car park, glancing around, trying not to look as though he was searching for her. If he lost her he didn’t want her to know she’d been pinged.

He spotted her blond wig moving between a panel van and a Mazda MX-5. He broke into a low run, the scar across his stomach a taut line of pain as he tried to keep a short profile. He used parked cars as cover but to his dismay, as he ran past the back of a blue sedan, she turned her head and looked right at him. He didn’t slow down. He accelerated hard and fast straight for her. Her expression turned to fright. She spun round and at the same time he heard two beeps and saw the MX-5’s hazard warning lights flash as the driver’s door opened.

He got to the car just as she slammed the door and snapped the locks in place.

She shook her head.

The second he saw her hand go to start the engine he leaned over and punched the side of his fist into her side window. A crack appeared.

As he drew back his fist again, the engine started with a roar. A crunch of gears as she rammed it into reverse.

Dan turned and sprinted for his BMW. Not far, maybe thirty yards, but it could be far enough to give her a disproportionate advantage. He reached it in a clatter of gravel, skidding to the driver’s door. Hauled it open and dived inside. Turned on the engine. He saw the MX-5 turn left out of the car park. He tore after her, engine roaring. The seatbelt ring tone came on but he ignored it. He couldn’t waste a second buckling up. He had to get behind her before she could vanish.