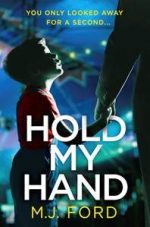 Today I have the pleasure to take part in M.J.Ford’s blog tour for his debut gripping thriller, Hold My Hand. Hold My Hand was published on March 16-th. Today I have an exclusive extract from this gripping thriller just for you. Many thanks to lovely Sabah and the amazing team at Avon for the chance to be part of this blog tour. I’ll be sharing my review soon. Don’t forget to visit all the other stops of this amazing blog tour. Easter is just around the corner and if you are looking for a perfect gift, look no further! Enjoy! 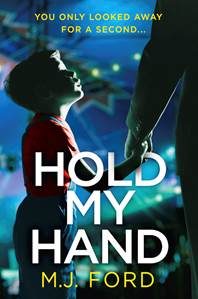 She sipped at a glass of champagne, feeling like a schoolgirl out of place at a disco. Amelia had offered her the bed in the spare room for the night, but she’d politely declined. It was weird enough just visiting for a few hours. She found the lounge had been renovated too. Gone was the old worn carpet, replaced by oak flooring and a plush Afghan rug. The furniture was leather and chrome. There were figurative daubs of paint on the walls instead of the conservative rustic watercolours her parents had favoured. She thought briefly of the stained sofa at the flat, with the numerous chips in the wallpaper. How the fuck did I go so wrong?

Eventually, she extracted herself through the back doors again, glad to be out in the warm evening air. The house’s garden had always been her dad’s pride and joy – dropping down towards a tributary of the River Cherwell at the bottom. Beyond, past a small orchard, the ground rose to abut the land of Cherry Tree Cottage, about two hundred metres away. Mrs Carruthers, Jo’s former piano teacher, had once lived there with her husband. They were both surely dead now, or at least moved on. The evening light was failing as Jo made her way down the steps, away from the glare of the security light, under an overgrown trellis. Paul wasn’t green-fingered at all, and there was something sad about the disarray.

The river had been fenced off, and Jo remembered Paul saying that Will had once had a bit of a scare down there, or perhaps it was one of his friends. It was a shame.

Jo climbed over, letting the chatter from the party fade into insignificance. There’d been newts and frogs down here when she was a girl. The ground was squelchy in places, but she reached the old beech tree, and saw to her astonishment that the swing was still there, hanging loose from one side.

She went further, using her phone as a torch, into ground that had always been a wilderness, where Dad had chucked the grass shavings and prunings to rot down into compost. Where, as a girl, she’d made up silly games about beautiful fairies and goblin kings, borrowing the plots from the Enid Blyton books she’d voraciously consumed.

Bats swooped over the old barn opposite like flakes of black ash. Jo couldn’t believe it was still standing too. It belonged to Cherry Tree Cottage, a relic from when the place was still a farm. As a girl, it had always scared her a little, sitting out there alone and abandoned, with its tiny shuttered windows. Mrs Carruthers said it was dangerous, close to falling down, and one wall was bowed a little.