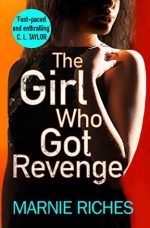 The Girl Who Got Revenge
Georgina McKenzie Series
Marnie Riches
thriller
Avon Books UK
April 19-th, 2018
Kindle
282
Copy provided by the publisher via NetGalley in exchange for an honest review.

‘Fast-paced, enthralling and heartrending; I couldn’t put it down’ C. L. TAYLOR

The fifth gripping thriller in the Georgina McKenzie series.

It’s Friday, it’s hot outside even if it is not even May. I hope you are all doing well. I am so delighted to share my post with you today. One of my favorite writers, Marnie Riches has a new book, and today is my stop of her blog tour. The Girl Who Got Revenge is the fifth in the row of Georgina McKenzie Series. Many thanks to lovely Sabah and the amazing team at Avon for the chance to be part of this blog tour. Don’t forget to visit all the other stops of this amazing blog tour! Enjoy!

If you haven’t met Georgina McKenzie by now, there is one thing about her you should know, she is the most stubborn person in the world. Finally with a PhD in criminology, she is trying to settle down with the detective Van den Bergen and finally find a home and a family, somewhere where she belongs to. But nothing comes out as she planned. Van den Bergen is a grandfather now, and he is trying to be the father he never was. When he is not playing the babysitter for his little granddaughter, he is working on a case. Her own parents are the most unreliable people in the world, her work has been declined and she is out of money. George feels like nothing can go worse.

But when a truck full of trafficked immigrants from Syria is confiscated by the Amsterdam police and a little girl is found dead, something in Georgina cracks inside. She decides to fight for the little girl, to be her voice and bring to justice the people responsible for her death. And not just her death, but to fight for the lives of many refugees who survive through hell just to get to the promised land.

Van den Bergen’s colleague from pathology, Marie, notices a strange connection among two unconnected dead bodies. Both ninety-five-years old men, both died of heart attack. The strange thing is that they both took an overdose of their regular safe medical therapy and the overdose is the one that caused the heart attack. The medications were prescribed by the same doctor. And both men had the same tattoo. The investigation takes Van den Bergen and George back to the WWII when the Jews were taken to concentration camps and very few of them managed to escape the Nazis.

Is this some kind of post-war revenge? Who is killing the old men? And who is the next victim?

Marnie Riches has made a very vivid connection between the refugees in the WWII and nowadays. In the middle of the two stories, she has built a solid criminal case to solve.  It is her least creepy, but the most emotional book. Even it is number five in the row, it can perfectly stand alone. I liked George, I liked Van den Bergen and the way they worked together, on the case and out of it. I’ve read three out of five of the series and already fell in love with this dynamic duo. Sometimes George’s impulsive behavior goes on my nerves, but that’s part of her beauty. I love these series!