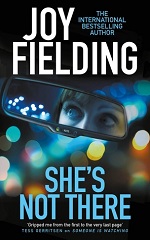 A novel of psychological suspense about a woman whose life takes a shocking turn when a young girl contacts her, claiming to be her daughter, kidnapped in Mexico years earlier, from the New York Times bestselling author of Someone is Watching.

A lifetime ago, every year Caroline Shipley looked forward to her wedding anniversary. But then a celebratory trip to Mexico for the occasion with her husband and friends ended in the unsolved kidnapping of her infant daughter, Samantha. Now, fifteen years after that horrific time, divorced and isolated,Caroline is forced to relive the kidnapping by reporters who call every year on the anniversary of Samantha’s disappearance. However, this year when the phone rings, Caroline hears the sweet voice of a girl claiming to be her long-lost daughter. Plunged back into the world of heartbreak, suspicion and questions that led the case to run cold so many years ago, Caroline doesn’t know what or who to believe. But when she starts to figure it out, she finds the answers dangerously close to home.

It’s a bright sunny day here and it is perfect for chilling in the garden with a good book. Today I have another review for you, from one of the best writers of psychological thrillers, Joy Fielding. She’s Not There is her latest novel and it is a real roller coaster of human emotions.

Caroline Shipley has suffered a lot. During an anniversary trip fifteen years ago, her younger daughter has been kidnapped. Taken away from the bed in the hotel room while she and her husband were having dinner at the restaurant. Fifteen years she is trying to find her daughter, fifteen years she is trying to survive. The marriage is over long time ago, the relationship with the other daughter is very sensitive, she loses her job as a teacher several times (who wants to employ someone to take care for other children and can’t take care for her own). Caroline has been accused for neglecting her child, for being a selfish mother, a lousy wife. But she still hopes for a happy ending. Still, after fifteen years, she hopes that her youngest is somewhere safe and sound and will come home one day.

And then, out of the blue, a phone call changes everything. A young woman from Canada claims to be her lost daughter. Coping with many frauds in the last fifteen years, she still decides to give this girl a chance. She really needs to believe in something. Could this girl really be her long lost daughter?

I think that the author portrayed Caroline really well. The struggles of a mother for her child are very emotionally written. Something like this can happen to anyone, it’s every parent’s nightmare. The fear, the suspicions, the struggles, the pain, it’s all there. A real emotional roller coaster, like ripped from the real life. I never suspected that kind of outcome, but the story kept me tensed till the last page. Overall, I liked it and  it is good read for all those who like psychological thrillers.