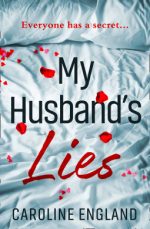 Today I have the pleasure to take part in Caroline England’s blog tour for her latest gripping thriller, My Husband’s Lies. My Husband’s Lies was published on 17-th May this year. Today I have an exclusive extract from this unputdownable read for summer 2018 just for you. Many thanks to lovely Sabah and the amazing team at Avon Books UK for the chance to be part of this blog tour. Don’t forget to visit all the other stops of this amazing blog tour.  Enjoy! 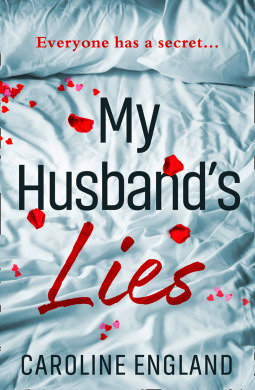 ‘I was gripped immediately’ KATERINA DIAMOND, author of THE TEACHER

Do you really know your friends?

On the afternoon of Nick and Lisa’s wedding, their close friend is found poised on a hotel window ledge, ready to jump.

As the shock hits their friendship group, they soon realise that none of them are being as honest with themselves – or with each other – as they think.

And there are secrets lurking that could destroy everything.
Tense, disturbing and clever, My Husband’s Lies is a breath-taking read, perfect for fans of Lucy Clarke and Erin Kelly.

Anna’s green anorak at the far end of the damp playground catches Jen’s eye. She briefly lifts her hand to wave before dropping it again. Holly is no longer at the primary school; she’s been in high school since September, but old habits die hard. She hated having Jen there at her school. It was bad enough if your mum was a teacher, but a lowly classroom assistant! It was just so embarrassing. So Jen acknowledges her pretty red-haired daughter discreetly on lunchtime duties, even though she’s only eight and still loves her mummy.

It’s the start of Jen’s second year. She’s still glad of her decision to train as an assistant rather than a full-blown teacher. For now at least. She works two and a half days in a job-share, giving her time to cram in the cooking, the shopping and the bills in the remainder of the week. Though in fairness, Ian does his bit; he irons if there’s sport on the television and he hoovers at weekends, pretty fair in her view. But then Ian is a good man. Except when he’s watching his beloved United play football, he’s an even-tempered, easy-going guy; they make a good team.

A football approaches and she runs, hoofing it accurately to a boy from her class. His freckled face colours with embarrassment. Jen should know better than to interrupt the boys’ game, but she was sporty as a girl and finds herself with daughters who prefer their mobile phones, television and music to sporting activities. ‘Do you wish we’d had a boy?’ she used to ask Ian, pretending a boy would have been nice for him rather than her, but now that Anna is nearly nine, capable of creating a website, let alone dressing and feeding herself, she can’t imagine wanting another child, either boy or girl; it would be too much like hard work.

The sudden spurt of activity has left her breathless. She knows she should lose a few pounds, but dieting feels like hard work too. Her daughters are all skinny. She wasn’t ever thin, not that she minded. Girls like to be skinny for boys, but in her experience, males prefer a little flesh.