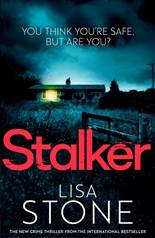 It’s a bright sunny day here and I hope you are having a great time. Today I have the pleasure to take part in Lisa Stone’s blog tour for her latest gripping thriller, STALKER. Today I have an exclusive extract from this terrific read just for you. Many thanks to lovely Sabah and the amazing team at Avon for the chance to be part of this blog tour. Don’t forget to visit all the other stops of this amazing blog tour! Enjoy!

Someone is always watching…

Derek Flint is a loner. He lives with his mother and spends his evenings watching his clients on the CCTV cameras he has installed inside their homes. He likes their companionship – even if it’s through a screen.When a series of crimes hits Derek’s neighbourhood, DC Beth Mayes begins to suspect he’s involved. How does he know so much about the victims’ lives? Why won’t he let anyone into his office? And what is his mother hiding in that strange, lonely house?As the crimes become more violent, Beth must race against the clock to find out who is behind the attacks. Will she uncover the truth in time? And is Derek more dangerous than even she has guessed?A spellbinding crime novel from the worldwide bestseller Cathy Glass, writing as Lisa Stone.

Moving his chair to the centre of the workstation, Derek made a brief scan of all the live streams on all four screens, making sure nothing untoward was going on that might require his attention in the families he monitored. He zoomed in on a couple of images, then stopped at the Williams’ house, zoomed in and engaged the microphone on the camera in their living room. Mrs Williams was on the telephone, talking to her babysitter whom he recalled was their goddaughter. She was asking if she was free to babysit that evening for a few hours, and apparently she was.

‘That’s great. Thanks, Sophie, sorry it’s short notice,’ Mrs Williams said. ‘We won’t be late. Yes, come here for seven o’clock and Russ will take you home after.’ Derek had missed why she and Mr Williams were going out at short notice but he now knew their goddaughter was called Sophie. He liked to know all their names; it made him feel part of the family life he so yearned for.

His mother called from downstairs to say that dinner was ready and he clicked the mouse to put the system into sleep mode before going down. At least this meal would be freshly cooked and not dried or congealed from being kept warm in the oven for hours. She was already sitting at the table in the kitchen, waiting for him before beginning. The table as usual was covered with the faded flowered tablecloth and laid with the correct cutlery and the condiments set in the centre. They ate like this, even though there was just the two of them and even though he was sure she’d have been happier with her meal on a tray in front of the television. It was sad seeing her sitting there waiting for him, touchingly pathetic.

‘They’re putting CCTV in the flats where my sister lives,’ she said, picking up her knife and fork as he took his seat.

‘She was surprised we didn’t have it here. Why don’t we, Derek?’

‘Mum, when I asked you, you said you didn’t want it. That it would make you feel self-conscious.’

He looked at her, not sure what to say for the best. ‘Don’t worry. This place won’t be burgled. You’re in most of the time and there’s little of value here for them to take.’

‘Whose fault is that?’ she snapped.

Derek didn’t reply. He knew the answer only too well. After his father had walked out, his mother had discovered he’d been borrowing heavily against the house and there was nothing left. It had taken Derek years to repay the debts, and the mortgage was still sixty per cent of the value of the house. He resented it too but he wished she wouldn’t keep harping on about it. It just made her more bitter.

They ate the rest of the meal in silence, then she returned to her chair in the living room while he washed up. It was part of their routine, their almost-harmony. Thank goodness he had his work.

He poured himself a glass of water and went upstairs as the theme tune of the first soap of the evening began in the living room. Dinner was timed around the soaps. She occasionally watched the news but not often. She said there was too much suffering in the world. She preferred the fictional world of the soaps.