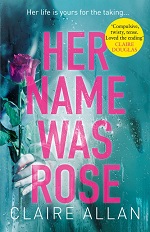 It’s a bright sunny day here and I hope you are having a great time. Today I have the pleasure to take part in Claire Allan’s blog tour for her latest gripping thriller, HER NAME WAS ROSE. It was published on June 28-th. Today I have an exclusive guest post from Claire Allan just for you. I am currently reading the book, so stay tuned for the review these days. Many thanks to lovely Sabah and the amazing team at Avon for the chance to be part of this blog tour. 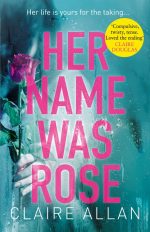 Her name was Rose. You watched her die. And her death has created a vacancy.

When Emily lets a stranger step out in front of her, she never imagines that split second will change her life. But after Emily watches a car plough into the young mother – killing her instantly – she finds herself unable to move on.

And then she makes a decision she can never take back.

Because Rose had everything Emily had ever dreamed of. A beautiful, loving family, a great job and a stunning home. And now Rose’s husband misses his wife, and their son needs a mother. Why couldn’t Emily fill that space?

I always knew when I started writing Her Name Was Rose that I would set the book in my home city of Derry in Northern Ireland.

The thing you need to know about Derry people generally is that we are all have a huge sense of pride about the place we come from – even if people don’t always agree on the city’s real name. It’s called Londonderry by some. Or Derry – Londonderry by others. In 2013, when we were the UK’s first City of Culture, we gained a new name; Legenderry and that’s one I’m fond of.

I was born and raised in the city. I persuaded my English husband to relocate here before we married and he’s now almost fully assimilated as a Derry man.

The city is in the very North West of Northern Ireland. Some people say The Troubles both started and ended on our streets. It’s where the civil rights movement of the 1960s started, but the people of Derry have also shown great leadership and example in moving on from our troubled past.

It also has been the birthplace of many popular figures in sport, music and drama. From The Undertones to James McClean, Nadine Coyle from Girls Aloud to Johnny McDaid from Snow Patrol, it’s a city that is very proud of what its sons and daughters have achieved.

And in recent times, it has come to public attention as the setting for the hit TV show Derry Girls about a bunch of school girls growing up in the city in the 90s.

For me though, it is home and a city that has transformed over the last twenty or thirty years. When I was young we were still in the midst of The Troubles. The city was bleak, dotted with shells of buildings which had been damaged over the course of years of bombing and violence.

Now it sits proudly on the River Foyle, a walkway on either side which is always teeming with people out walking, running and stopping for a chat each day the sun comes out.

Cafes, bars, restaurants, pop up shops, quirky markets, a book shop which contains Ireland only typewriter museum and a chair signed by every author who has every visited, shared spaces where concerts are now held – and all of this on the border with Donegal.

So writing Her Name Was Rose, I decided to utilise the locations on our own doorstep. I choose to set the fictional dentists in which Rose works in the centre of our revitalised city centre. I chose the tree lined Limavady Road, which is lined with houses bursting with character, for the location for Rose and Cian’s dream home.

And just as the river Foyle is central to Derry, it is central to Her Name Was Rose too, with some pivotal action surrounding one of the river’s three bridges.

Creating a real sense of place and of the Derry community was very important to me and I hope readers will enjoy getting a taste of what life is like in the city I’ll always call home.

But as Emily is about to discover, no one’s life is perfect … and not everything is as it seems.

About the author: A former journalist and columnist, Claire Allan has been writing fiction since 2006.

An Irish Times bestseller, she has tackled issues from post-natal depression, infertility, and dementia through to writing a based-on-a-true-story book about a couple reunited after 50 years apart. She has now decided to unleash her dark side!

Married with two children, two cats and a mad puppy she is happiest lost in a good book. She has kissed Michael Buble.