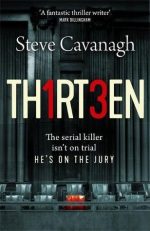 THE SERIAL KILLER ISN'T ON TRIAL.

'THIRTEEN is my favourite read of the year.' Sarah Pinborough

'Smart and original. This is a belter of a book.' Clare Mackintosh

They were Hollywood's hottest power couple. They had the world at their feet. Now one of them is dead and Hollywood star Robert Solomon is charged with the brutal murder of his beautiful wife.

This is the celebrity murder trial of the century and the defence want one man on their team: con artist turned lawyer Eddie Flynn.

All the evidence points to Robert's guilt, but as the trial begins a series of sinister incidents in the court room start to raise doubts in Eddie's mind.

What if there's more than one actor in the courtroom?

After so much hearing about this book on Facebook groups, I decided to give it a try. I downloaded it and took the kindle with me on the beach. And oh, my God, I couldn’t leave it for two whole days! This book is so addicting. How come I haven’t heard about this author before? Thirteen is fourth in the series! My jaw dropped so many times, I still have some sand in my mouth, hahaha! So, after so many recommendations, here is another one. Let me tell you something about one of the best books I’ve read this year.

Bobby Solomon and his wife had everything. They were living the American dream.  Both were celebrities with a reality show on the go. Then Bobby came home one night and found his wife and the bodyguard killed in the bedroom. Everything pointed to Bobby, a jealous husband who had found that his wife was having an affair and killed her and her lover.

The defense want only one man,  the lawyer Eddie Flynn. Eddie Flynn is like a bulldog in the courtroom and out of it. One look at Bobby Solomon  and he knows that this guy is innocent. But if he is innocent, who is the real killer?

Among the evidence, there is a dollar bill stuffed in the mouth of the bodyguard. Some kind of payback or what? No one takes that evidence seriously. But as the investigation goes, Eddie Flynn finds out that dollar bills are also found is some other cases, some other murders in different countries. But are these victims connected somehow or it is just pure coincidence? Is it possible that there is a serial killer on sight?

Not wanting to reveal more, I’ll just say: “WOW”! This book left me speechless. It has a very unique plot and very grippy story. Even if it was fourth in the series, I had no problems reading it as a standalone. It is very different from the thrillers I’ve read lately, all in a positive way. It really stands out! I’ll highly recommend this book to everyone I can, even the publishers in my country.  After this, I’ll be definitely in search of the other books in the series. I love it! Totally recommended!