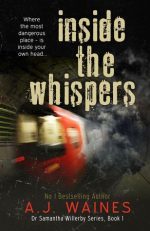 Where the most dangerous place – is inside your own head…

Following a London Tube disaster, three traumatised survivors turn to clinical psychologist, Dr Samantha Willerby, for help – but she’s mystified when their stories don’t add up. Her confusion turns to horror when one by one, instead of recovering, they start committing suicide.

When her partner, Conrad, begins to suffer the same terrifying flashbacks, Sam is desperate to find out what is causing them and a mysterious and chilling crime begins to unravel.

Then the flashbacks begin for Sam…

The first book in the Dr Samantha Willerby Series, INSIDE THE WHISPERS is a tense, haunting Psychological Thriller that will leave your nerves in shreds.

Perfect for fans of Gillian Flynn, Paula Hawkins and Mark Billingham. If you spot the killer you're only half-way there - it's the WHY and HOW that will have your head in a spin.

Hello, friends, fellow bloggers, and avid readers! Today I have another review for you.  It is part of D-r Samantha Willerby Series  and I am sure you’ll enjoy it. It is one of a hell psychological thriller.

This is the first book in the series. The main character, D-r Samantha Willerby is a clinical psychologist. She works with people with post-traumatic stress disorder. Not so long time ago, there was an accident in the Tube and now she treats three survivors who have flashbacks of the accident. Each one of them has a same story. Exactly same story. She decides to check and finds out that nothing of that actually happened. Then one of them commits suicide, not being able to live with the quilt for not helping the other people in the Tube. She checks the facts again, only to find out that all those details mentioned in the patient’s story never happened. Then another of her patients, a Tube survivor, also commits suicide. That cannot be! Two suicides are not accidental. Something more is going on.

In the very same time, Samantha has to deal with her younger sister who shows up at her door uninvited.  She suffers from schizophrenia and is possible runaway from the mental hospital. But she is her little sister and Samantha can’t turn her back again.

When her boyfriend, Conrad, begins to suffer the same terrifying flashbacks as her patients, Sam is desperate to find out what is causing them. After all, Conrad was never near the Tube that time.

Then the flashbacks begin for Samantha herself…

I’ve found the story very easy to read. The plot is very intriguing and the pace is very fast. What starts as one story, soon turns into another one, and another one. I’ve found the ending little bit sloppy, but that didn’t spoil the whole impression. There were moments when my jaw dropped and moments when I said: “What, no way!”. Some things were hard to swallow, some were suspiciously plausible.  Full of ups and downs, this story is so tense till the very last page. Overall, I liked it. I haven’t read anything else from this author, but I liked her writing style and will be in the search of other of her books.