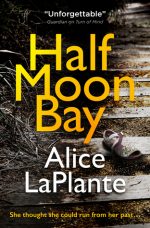 A smart, haunting tale of psychological suspense from the award-winning New York Times bestselling author of Turn of Mind.

Jane loses everything when her teenage daughter is killed in a senseless accident. Jane is devastated, but sometime later, she makes one tiny stab at a new life: she moves from San Francisco to the tiny seaside town of Half Moon Bay. She is inconsolable, and yet, as the months go by, she is able to cobble together some version of a job, of friends, of the possibility of peace.

And then, children begin to disappear. And soon, Jane sees her own pain reflected in all the parents in the town. She wonders if she will be able to live through the aching loss, the fear all around her. But as the disappearances continue, she begins to see that what her neighbors are wondering is if it is Jane herself who has unleashed the horror of loss.

It’s a bright sunny day here and I hope you are having a great time. Today, I am reviewing one story of psychological suspense, Half Moon Bay. It was published in September last year by Titan Books. So, here are my thoughts:

I was immediately blown away by the blurb. Jane’s teenage daughter is killed in a tragic car accident. Soon after the daughter’s death, the husband finds new love and leaves her all alone. Desperate for escape from her memories and her pain, Jane makes herself a new home in a small town called Half Moon Bay. New home, new people, new life. But not even the long walks along the beach, nor the new friendships with the locals can ease the pain Jane carries inside. Then, a new couple moves into town, a husband and wife that can only be described as “beautiful”. Jane is immediately attracted to them, like she is in love with both of them.  Then children begin to disappear, one little girl after another, and soon Jane finds herself in the parents’ shoes. She knows the pain. She knows what it’s like to loose a child. But as a grieving mother devastated by her pain, can Jane be responsible for the deaths of the little girls? She becomes the prime suspect.

Are the disappearances of the children acts of a mentally unstable grieving mother or a serial killer?

What started like a great plot and an excellent story full of tension, soon became more and more diluted. I don’t know what other word to use to describe my feelings. The tension goes up, and then all the way down. The story had a great start and few very good twists, but that thrilling sense in the beginning of the plot somehow diminished as the story continued. Jane’s childhood life was absolutely unnecessary part of the whole story, according to me. After the half of the story, the ending was predictable. I don’t want to spoil the book, that is just my opinion. I was expecting more.