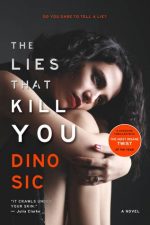 The Lies That Kill You
Dino Sic
Psychological thriller
The Scoop
January 15th 2019
Kindle
366
Copy provided by the author in exchange for an honest review.

Sunset.
Beach.
A man and a woman.
He's lying on the sand, bleeding. She's holding a gun, trembling.

After her mother dies from Alzheimer's, Emma moves with her husband to Montauk to build a new life. She's immediately intrigued by the manor next door and its mysterious owner, Mr. Gold. Nobody has ever seen him. Nobody even knows his first name. But he knows them.

The next day, Emma finds an invitation at her doorstep for the 4th of July party hosted by Mr. and Mrs. Gold. Her husband doesn't want to go, but she can't resist the temptation. It's the biggest mistake of her life because after she sees something at that party, she'll get herself involved in a mystery that could destroy her and her family for good.

The day after, Gold's wife has disappeared, and he's a potential suspect. Emma believes he's innocent and wants to help him, and he trusts only her. In spite of her husband's jealous protest, she agrees to cover his case on her blog and uncover the truth. She'll find out that his wife isn't just another gone girl and that there's a dark and sick scheme in play. What she doesn't know is that someone is watching her every move, that someone has broken into her house while she was sleeping, and that someone is pulling her strings behind the curtains. Soon, she will, and it will lead to …

… that night on the beach. With a gun in her hand, she has two options: she can either pull the trigger and save her family or do the right thing and lose everything she cares about. What is she going to do?

It’s a bright sunny day here, it’s obvious that the spring is coming and I hope you are having a great time. Today I am reviewing one very gripping psychological thriller, The Lies That Kill You.  A story written by a young Croatian author and published in January 2019.  And now I am sharing my review with you.

A new beginning doesn’t always mean a good thing. Emma and Matt need a new fresh start after the death of Emma’s mother and they decide to buy a beautiful house on the beach. Their only neighbors are the Golds, married rich couple that hides their private life very well. During one of her walks on the beach, Emma saves a man from drowning. It turns out it’s Mr. Gold. Soon after that, Mr.Gold invites Emma and Matt at his party. Matt refuses to come, so Emma goes alone. But Matt is jealous and goes at the party, but he stays hidden in the yard of the house. After a loud fight, Mrs. Gold disappears.  There is blood in the house. She is kidnapped or possibly murdered. The prime suspect, always the husband. But Mr. Gold claims he is innocent. He wants his wife back.

In town, Emma meets Alice, a young mother with a toddler whose husband is always away. Alice never goes out by herself. Her husband, who travels a lot, is a mystery  himself. There is something about Alice, something that says “abused wife”.

Mr. Gold, a man of mystery, a man with many faces.

Alice, protective mother, a wife who seems to be afraid of her husband.

Four people, one victim. Who is the killer?

A story told from first person perspective. Many people find that overwhelming, but not me. Each one of the characters tells his own story, his own view. When Mrs. Gold disappears, everyone is a witness, everyone is a suspect. Who to trust?

The story was little bit overwhelmed with characters’ past, and there were some confusing parts. Emma and Matt are a couple with many secrets between each other. Why? No, the story didn’t make my jaw drop, but it made me wonder till the last page. Totally unpredictable, I didn’t  see the end coming. Overall, I liked it. I can easily see it as a movie.