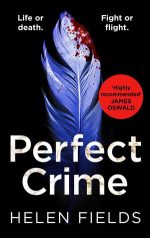 Your darkest moment is your most vulnerable…

Stephen Berry is about to jump off a bridge until a suicide prevention counsellor stops him. A week later, Stephen is dead. Found at the bottom of a cliff, DI Luc Callanach and DCI Ava Turner are drafted in to investigate whether he jumped or whether he was pushed…

As they dig deeper, more would-be suicides roll in: a woman found dead in a bath; a man violently electrocuted. But these are carefully curated deaths – nothing like the impulsive suicide attempts they’ve been made out to be.

Little do Callanach and Turner know how close their perpetrator is as, across Edinburgh, a violent and psychopathic killer gains more confidence with every life he takes…

I hope you are having a great time. Today, I have another review for you. I am a huge fan of Helen Fields and  very excited to be part of this amazing blog tour. It came out in April this year. I absolutely love D.I.Callanach Series and the book number five certainly doesn’t lack my appreciation. Don’t forget to visit all the other stops on this amazing blog tour. So, let me tell you something about the Perfect Crime.

When a man tries to jump of a building in front of many people, everyone thinks it’s a suicide.  Seeing him standing up there, no person in the crowd will think otherwise. No one could even imagine that everything was a setup.

A woman dies in her appartment. At first sight, everything points to a suicide. But after closer investigation, it seems that everything is arranged, the woman is forced to kill herself.

Two people dead, one thing in common. They both suffered from depression, they both were on antidepressant pills. But none of them has actually commited the suicide. They were both killed, in the cruellest possible way.

The team Callanach and Turner work on the case. My favourite police couple this time has full hands of work. While solving the suicides across the city, Luc has to solve some personal issues. Skeletons from his past simply don’t leave him alone. And this time, people are dying.

Helen Fields turned out to be one of my favourite crime authors of all times! She created a real roller coaster with these #Perfect Series! A creepy story full of turbulences and turn-overs! I must confess, this time I little bit predicted the culprit, but that didn’t stop me from enjoying the book. The vivid descriptions of  the killing acts were so creepy!

But as I said, I loved the book! I enjoyed the book number five as much as I enjoyed the previous books. The plot held my attention till the very last page.  There is a killing story, a personal story, an on and off story. All well incorporated into a perfect plot. Can’t wait until the next one. Totally recommended!