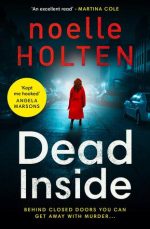 A dark and gripping debut crime novel – the first in a stunning new series – from a huge new talent.

When three domestic abuse offenders are found beaten to death, DC Maggie Jamieson knows she is facing her toughest case yet.

The police suspect that Probation Officer Lucy Sherwood – who is connected to all three victims – is hiding a dark secret. Then a fourth domestic abuser is brutally murdered. And he is Lucy’s husband.

Now the finger of suspicion points at Lucy and the police are running out of time. Can Maggie and her team solve the murders before another person dies? And is Lucy really a cold-blooded killer?

I know Noelle Holten as a blogger and blog tour organizer for a very long time, and was very excited to read her very first book. Her debut is Dead Inside, a police procedural with DC Maggie Jamieson as a main character.

One domestic abuser is dead. Brutally killed. Then another one. And another one.  DC Maggie Jamieson and her team have full hands job to do. Who is taking the justice in their own hands?

Lucy is a probation officer, but also suffers domestic violence at home. She works with domestic abusers and their victims, but she can’t get out from her own circle of abuse. There are many reasons to leave, but she also finds many reasons to stay. She hopes to see  more of Dr Jekyll than Mr Hyde in her husband.

Shell is woman who once suffered domestic abuse. But, now, she is lonely and wants to feel loved. She thinks she has learned her lesson not to involve herself with certain type of men, but loneliness is a strange thing. Can she trust the man who flatters her?

There is very little information about DC Maggie Jamieson. She is tranferred from another department and still recovers from the previous case. Her relationship with her brother is not the best, she is tired to play the big sister all the time.

The main theme of the story is domestic violence. The author slowly introduces us in the world of an abused victim. It never starts suddenly, but slowly one step after another. The mind of an abused victim is not like the one watching the party from a side. There is negation, denial, giving excuses and hope to never happen again. But it does, over and over again.

Dead Inside is a mix of psychological thriller and police procedural. At least, that was the way I felt about it. There were too many characters (according to me) and there were moments when it was hard for me to follow the story. Sometimes I was wondering if Lucy was the main character or Maggie. But in the second half of the book there were twists (a lot) and the ending was quite unexpecting.  What started like a domestic abuse story, ended like a high profile thriller. A great start for a debut author.