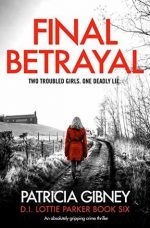 ‘She lifted the flap of the envelope and pulled out the single white page. As she opened it up she stared, open mouthed. Four words were typed on the page. I am watching you.’

When Amy Whyte and Penny Brogan leave a local nightclub in the early hours of Sunday morning and don’t arrive home, their families are beside themselves with worry. Conor Dowling has just been released from prison, a man full of hatred for Amy, the girl who put him behind bars in the first place.

The case is given to Detective Lottie Parker, when the girls’ blood-soaked bodies are found, days later, in a derelict squat. Chillingly, both girls are clutching silver coins in their hands – what message is this killer leaving behind? All the signs point to Conor but his alibi is water tight.

As Lottie examines Penny and Amy’s final days alive in a desperate search for clues, two more girls are found stabbed to death in a luxury apartment complex. Caught up in what is fast becoming her toughest case yet, Lottie is unaware that somebody is watching her every move.

Then Lottie’s two daughters, Katie and Chloe suddenly disappear from the town centre. Terrified that the killer has her girls, the stakes have never been higher for Lottie.

But as Lottie puts everything on the line to find her daughters and solve the case, she’s about to find herself in terrible danger – someone has a personal axe to grind with her and they know the best way to get to her is to hurt the ones she loves the most.

Today I have the pleasure to review book number 6 in Detective  Lottie Parker Series by one of my favourite writers, Patricia Gibney.  Shame on me, this is my third book from these fabulous series. I had a really great time reading it, so here is my review.

Ten years ago, one man goes to jail for attack and robbery. Two young girls testify against him. Now, one girl after another, the two girls are found dead with their best friends. Two couples of young women are found dead with silver coins in their hands. Brutally murdered. And the man they testified against, is outside of the jail, free. With a very weak alibi.

Detective Lottie Parker works on the case. Mother of three, grandmother of one, she tries to manage her family life and the long working hours. A new house, new life, new beginning. She also tries to manage her relationship with her long lost half brother and sister. But what she is not aware of, is that someone is watching her every move. And her daughters’. When she finds silver coins in her grandson’s stroller, she finds it all connected. And she is scared. Scared for her daughters, for her family, for not being able to protect them. Unless she solves the case and puts the right culprit behind bars.

Can she find the real killer?

I liked Lottie Parker as a character from the very first book I read from the series. I like her attitude, her kindness, her love for her family, the way she is devoted to her job and her family at the same time. She grows as a person through the series coping with the loss of the husband and raising three children as a single mother. Reading this book,  I liked the tension in the story, the thrilling mystery around the murders and the creepiness connecting her family with the case. Patricia Gibney is one of my favourite writers of police procedurals. I totally recommend Final Betrayal!