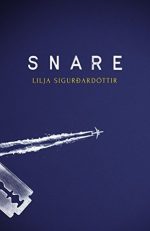 After a messy divorce, attractive young mother Sonia is struggling to provide for herself and keep custody of her son. With her back to the wall, she resorts to smuggling cocaine into Iceland, and finds herself caught up in a ruthless criminal world. As she desperately looks for a way out of trouble, she must pit her wits against her nemesis, Bragi, a customs officer, whose years of experience frustrate her new and evermore daring strategies. Things become even more complicated when Sonia embarks on a relationship with a woman, Agla. Once a high-level bank executive, Agla is currently being prosecuted in the aftermath of the Icelandic financial crash. Set in a Reykjavík still covered in the dust of the Eyjafjallajökull volcanic eruption, and with a dark, fast-paced and chilling plot and intriguing characters, Snare is an outstandingly original and sexy Nordic crime thriller, from one of the most exciting new names in crime fiction.

I bought this book at this year’s book fair and it comes from the writing pen of Icelandic author Lilja Sigurdardotir. No, it’s not the famous Irsa, and no, they are not relatives. But Lilja also writes crime novels. “Snare” is part of a trilogy and I hope that the other two parts of the series will be translated soon.

The main character is Sonja, a young mother who has to give up her son after the divorce due to lack of money to support him. After a discreet proposal of the lawyer who represents her in the divorce lawsuit, she becomes a “mule”. She starts to transport drugs across the border. Aware of what she has done, she tries to get out of the net, but those who pull the strings simply do not let go of their claws. Sonja becomes a victim of violence, blackmail, threats, and fails to escape even an experienced customs officer.  Bragi is about to retire, and wants to spend more time with his ailing wife, but his experienced eye simply knows when an airport passenger is blurring something and he is not going to retire until he has resolved it. Sonja is trying to get out of the network in which she finds herself, and things are complicated by Agla, the woman with whom she gets in a relationship after the divorce, and she is prosecuted by the financial police for embezzling money in a bank.

This is a fast-paced novel, and although I predicted the main villain (perhaps because I read a lot of thrillers), it is still a story that keeps my interest to the last page. I like that there are few characters and the names are easy to remember. This is a rare case in Scandinavian novels.

What I especially liked was the Macedonian edition of the book itself. Small enough to fit in any bag or backpack, with a large enough font and wide spacing for easy reading. It is not a classic pocket edition. Ideal for someone like me reading on the bus. A big BRAVO for the edition “Book Available to Everyone”!