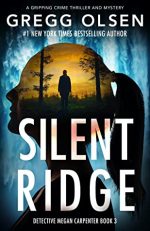 One bath wall is a mural of a brilliant-yellow sunflower. The theme carries over to the shower curtains, but the yellow vinyl is spattered with red blotches. Propped against the mirror is a South Kitsap High School photo of a teenaged girl.

Detective Megan Carpenter is no stranger to horrifying crime scenes, but when she arrives at the home of a woman whose body has been brutalized, Megan is shocked to discover that she knows the victim. Monique Delmont helped Megan when she was in danger years ago. And the killer has left a disturbing calling card… two laminated photographs of a sixteen-year-old high school girl – Megan.

Someone is taunting her in the worst way possible and Megan is convinced she knows who is responsible. She just has to find him.

With the help of her new partner, Deputy Ronnie Marsh, Megan begins to unravel the clues that will lead them to the killer including links to three female murder cases from nearly twenty years ago – one of which was Monique’s daughter.

But to protect those closest to her, Megan must continue to hide the dark truth of her past, even if that means lying to her team about her connection to Monique.

When two photographs of a teenage Megan are found at her boyfriend’s place in Snow Creek, she knows the killer is circling and ready to strike again.

Can she get to him before he finds her? And will she pay the ultimate price for trying to keep her terrifying past buried?

It’s been a while.

It’s been a hell of a year. I work in the health department and because of the corona virus pandemia there were many double shifts and not much time to read books and write reviews. I really hope that this year will be better and we will beat the virus.

This time I am writting a review for Gregg Olsen’s book Silent Ridge. It’s the third in the Megan Carpenter Series.

A woman is found dead in her bathroom, with the skin removed from her body. Two photos are left on the crime scene. One old, one new, detective Megan Carpenter is on both.

Megan has a past. Everyone does. But hers is a little bit different. And she doen’t want anyone to know about it. Finding the photos, she knows she is hunted. Because the dead woman was part of the past she buried long time ago.

This time Megan has a partner, Ronnie, and learns how to work in a team. She isn’t used to depend on others, she doesn’t attach to things and people. But maybe, it’s time to change that. For her own sake.

I mentioned previosly that this was the third book in the series. It can be read as a stand alone, but I think it’s better if you start from book one. Just to know Megan better. I liked the story, I liked the way Megan handled the situation, I liked her relationship with Ronnie. What I didn’t like, was the killer’s point of view. Not that I didn’t like it at all, but I think that it revealed too much and too early. Part of the mystery was gone. And because of that, somehow the ending was predictable. But that is just my opinion. Overall, I liked the book and will be in search of Gregg Olsen’s other books.