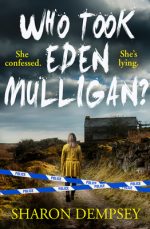 ‘They’re dead. They’re all dead. It’s my fault. I killed them.’
Those are the words of Iona Gardener, who stands bloodied and staring as she confesses to the murder of four people in a run-down cottage outside of Belfast.

Outside the cottage, five old dolls are hanging from a tree. Inside the cottage, the words “WHO TOOK EDEN MULLIGAN?” are graffitied on the wall, connecting the murder scene with the famous cold case of Eden Mulligan, a mother-of-five who went missing during The Troubles.

But this case is different. Right from the start.

Because no one in the community is willing to tell the truth, and the only thing DI Danny Stowe and forensic psychologist Rose Lainey can be certain of is that Iona Gardener’s confession is false….

This time I am reviewing a brand new autor to me, Sharon Dempsey, and her latest book, Who Took Eden Mulligan. I enjoyed reading the book and I hope you’ll like it too.

Iona Gardener shows up covered in blood that isn’t hers and confesses the murder of four of her friends in the cottage near Belfast. When the police arrives at the crime scene, they find five old dolls hanging from a tree. And inside, among the dead bodies, there is a question written on the wall, „Who took Eden Mulligan?“. Eden Mulligan was a missing person, mother of five children, who disappeared during The Troubles, Northern Ireland conflict. But nothing connects Eden Mulligan with the five young people who spent their weekend at the cottage. So how are the two cases connected?

DI Danny Stowe and forensic psychologist Rose Lainey work on the case. Both cases. They have problems from the very beginning because nobody wants to talk, everyone is afraid. The conflict ended not so long time ago and the scars are still fresh. Or maybe it ended just officially.

DI Stowe is fighting his own personal problems. His marriage is not working well and he can’t help it. The forensic psychologist, Rose Lainey is coming back to Belfast after her desperate try to run away from it. But you can’t hide from your past, it follows you wherever you go.

This is a new author for me and I liked her writing. I liked the setting, Belfast, because I don’t know much about it, I live on the other side of Europe. I wasn’t familiar with The Troubles, so I did a research on internet. I like it when the book inspires me to do a research and learn about things that I don’t know much, Irish history, for example. This isn’t ordinary police procedural story and that’s why I liked it. I liked how Rose ‘s character was portrayed, little bit more than Danny’s. But that’s my opinion. Overall, I enjoyed reading the book and will be in search of other books from this author.