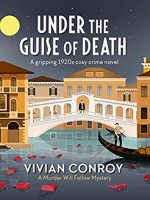 Under the Guise of Death
Murder Will Follow Mystery #3
Vivian Conroy
mystery
Canelo
November 28th 2019
Kindle
276
Copy provided by NetGalley in exchange for an honest review.

In the City of Masks, deadly secrets are about to be revealed…

While attending a lavish masked ball in Venice, retired Scotland Yard detective Jasper has a shock when, at the midnight demasqué, he spots a woman whose accidental death he investigated in England three years ago.

Even more stunned than Jasper is the woman's husband, Lord Bantham, who has since remarried, not to mention his new wife who sees her acquired position and wealth slip away. Then there are her old friends who all seem to have known more about the 'accident' than they ever let on.

When the resurrected lady is found dead the next morning on one of Venice's many bridges, the question is: who wanted Lady Bantham to die, again?

The third book in the Murder Will Follow series, this is a gripping mystery perfect for fans of Agatha Christie and Robert Thorogood.

In the City of romance and love, a murder happens. Venice is a gorgeous city, fulfilled with love and desire. But under the mask of romance, lies a mystery that has to be solved. Three years ago, the wife of a respectable citizen dies in a car accident. Today, the rich husband has a new wife but the dead one appears to be alive. Everyone, even the inspector who worked on the case three years ago, thinks that there is some kind of logical explanation, but the dead wife dies again. This time, for real, on the most famous bridge in Venice.

The retired Scotland Yard detective Jasper lives in Venice now. He was working on the car accident case three years ago. It happened in England. Today, in Venice, the dead victim of car accident rises from the dead, just to die again.

Who is the dead woman?

Who killed her? The husband, his new wife, or the former lover?

Who died three years ago?

Venice supposed to be his retirement vacation. Detective Jasper has to solve his case all over again.

An intriguing mystery set in the city of masks. I had a feeling I was attending a masked ball while reading it. The story gives you the sence of being in the middle age, when people wore ball gowns and talked like in Shakespeare’s dramas. And yet, you are here, in twenty-first century, comfortably seated on your couch. An easy read , perfect for a relaxing afternoon. It is a third book in the series, but that didn’t stop me from enjoying the book. Jasper is adorable character, there is nothing out of ordinary about him, like in the other detective’s stories. I adore Venice, been there and always love reading stories set in Venice. Even the murderous ones.