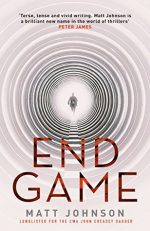 Robert Finlay seems to have finally left his SAS past behind him and is settled into his new career as a detective. But when the girlfriend of his former SAS colleague and close friend Kevin Jones is murdered, it’s clear that Finlay’s troubles are far from over. Jones is arrested for the killing, but soon escapes from jail, and Finlay is held responsible for the breakout. Suspended from duty and sure he’s being framed too, our hero teams up with MI5 agent Toni Fellowes to find out who’s behind the conspiracy. Their quest soon reveals a plot that goes to the very heart of the UK’s security services. End Game, the final part in the critically acclaimed Robert Finlay trilogy, sees our hero in an intricately plotted and terrifyingly fast-paced race to uncover the truth and escape those who’d sooner have him dead than be exposed.

It’s a bright sunny day here. It’s November, but the temperature outside is 20*C.  I hope you are having a great time. Today I am reviewing one very gripping action thriller, End Game.  I had an exclusive extract from this book previously on this blog , and now I am sharing my review with you.

The story centers around Robert Finlay, a former SAS agent, who now works as a detective. This time, his former SAS colleague, Kevin Jones, is in trouble. Jones’ girlfriend is murdered and he is arrested for her murder. So, Jones turns to his old friend and former colleague Finlay to help him clear his name and find the real murderer. As the story continues, it seems that there is more than just a murder here. Finlay’s investigation digs deep into the UK’s secret services where foreigners are hired as payed murderers, where there are listening devices almost everywhere. Top secret documents, top secret missions, fake news released in public, conspiracy everywhere. Very soon, Finlay’s life is in danger.

Can he solve the case and survive his mission?

Even if this is third in the series, End game is my first book from this author, who is also former soldier and Metropolitan Police officer. But that didn’t stop me from enjoying the book. It can perfectly stand alone. The story is fast-paced, adrenaline-rushed, full of action thriller. I could almost feel the chase and the rush in the story. I enjoyed the story, found it tensed at the moments, but I liked it. The author described the main character well. Maybe it’s little bit him in the Robert Finlay’s personality and biography and this guy definitely knows what he writes about. For the fans of action thrillers and spy novels, this is the perfect read!