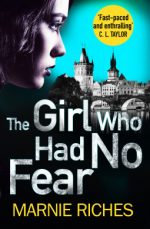 Hi, guys.
Today I have a great pleasure to welcome one of my favourite crime writers ever, Marnie Riches. She made a big BOOM with the series #TheGirlWho. If you haven’t read any of them, GO, GO, GO and get your copies. In meantime, read this amazing post of hers and don’t forget to visit all the amazing bloggers who hosted this blog tour. 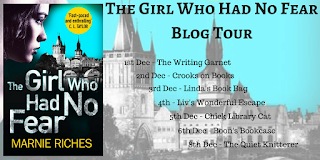 Why crime fiction? By Marnie Riches
I have read crime fiction and thrillers sporadically but with great enthusiasm since my childhood, plundering my mother’s copies of Harold Robbins A Stone for Danny Fisher and Peter Benchley’s Jaws at the tender age of about ten. It was never unusual for me to read something quite adult and thrilling as a child, alongside more traditional age-appropriate fare of C.S. Lewis’ Narnia books. My reading choices were never censored, thankfully.

For many years, however, after having been compelled to read a lot of classic German and Dutch tomes for my studies, favourite stories that I read for pleasure included fantasy (yep, I’m down with the Hobbitses, precious), a plethora of commercial women’s novels (Jackie Collins featured heavily, I must confess) and a lot of the literary, feminist novels that Virago published in the 1990s. I got heavily into children’s fiction too, as it provided delightful escapism as well as a very high standard of writing.
Small wonder, then, that when I started writing seriously in my mid-thirties – I had two children by then – I chose to write children’s fiction initially. But without realising, the influence of crime thrillers was always in evidence when I wrote. First, I polished a novelisation of a 12th-century epic Dutch poem about Charlemagne the Great, that I had first drafted as a 20-year-old at university, hoping to turn it into a historical YA thriller. There was murder, betrayal and intrigue a-aplenty. Then, I wrote a middle grade crime thriller about the young Miss Marple, who was actually a twelve-year-old girl from Huddersfield, investigating alien sightings in the remote West Yorkshire countryside. In fact, pretty much everything I wrote for children was page-turning with a mystery at its heart. But it wasn’t enough and though I had a six books in a children’s historical fiction series – Time-Hunters – published under a pseudonym of Chris Blake, my own children’s fiction wasn’t getting picked up by editors. Why? I think I was writing the wrong thing! Children’s fiction is funny and fast-paced and compelling, but it wasn’t bloody enough, it wasn’t sweary enough, it wasn’t gritty enough for my tastes.
The Girl Who Wouldn’t Die was itching to get out of me. It was the pinnacle of my literary aspirations to write a complex crime thriller with multiple plot strands that tied together in a satisfying way by the end. Georgina McKenzie’s first story evolved from a short story I had written about an incident that had happened to me as a teen – where my mother and I were petrol bombed by violent kids on our council estate. Everything clicked into place quickly once I realised that short story had to grow into something longer and more challenging. I realised I was steeped in crime. I had grown up surrounded by it. I had grown up reading it. I was destined to write it.
Now, as the fourth George McKenzie novel is published – The Girl Who Had No Fear – I realise that though I may love the odd foray into writing women’s fiction and/or humour, crime fiction is my calling. For me as a writer, there is no other story-telling platform that offers the opportunity to examine social issues, world politics and the psychology behind human behaviours in quite such depth. I can create a puzzle for my readers to solve. It’s such a wonderfully reciprocal and symbiotic relationship between author and reader. And I get to swear and pronounce judgement on some really nasty characters too! What fun it is to be a crime writer. I am truly blessed.


If you wanna know more about Marnie Riches and #TheGirlWho Series, you can find her here: