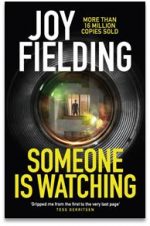 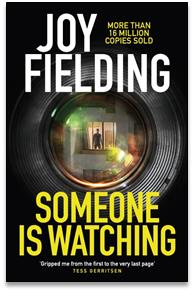 Someone is Watching
Joy Fielding
psychological thriller
Bonnier Zaffre
December 1st 2016
Ebook
384
Copy provided by the publisher in exchange for an honest review.

The Girl on the Train meets Rear Window in this gripping novel from a queen of psychological suspense.

Bailey Carpenter is a smart and savvy private investigator until a horrific attack leaves her trapped at home in her Miami high-rise apartment, crippled by paranoia.

Everywhere she looks, she sees the face of her attacker.

Including in the apartment directly opposite her.

Where someone is watching.

A tour de force from a master of psychological suspense, Joy Fielding's devilish and gripping novel will have you holding your breath until the very end.

That was my first thought when I started this book.

Bailey’s hallucinations are mixed with her memories and it is hard to distinct what is real what is not. There are moments when you ask yourself when it is going to be over. Bailey is confused and she sees her rapist everywhere, in the elevator, in the gym, on the street, on the window across the street. She accuses almost every man she meets. Can mind of a victim be so confused?

A little help comes from her family. She is not in a good relationship with her half-siblings, so she doesn’t know how to react.  Do they really care about her or they are using her situation? There is only one way to find out.

Bailey becomes obsessed with the man. Is he an abuser? What did he do to his wife? Is she all right? Is it possible that he is the man who attacked her? What to say to the police? She cries wolf all the time! Why is she watching him? He deserves privacy.

Doubts, doubts, doubts! All the time. She doesn’t even trust herself. Can her nightmare finally be over?

If you are a fan of The Girl on the Train, you gonna love this book. It is quite different, but also quite similar when it comes to the main character. There are parts of the story when you want the doubts to be over, it’s like crying wolf all the time. But there are parts when the story becomes intriguing and grippy. The end itself is not predictable, which is a big plus, but also it didn’t leave my jaw opened. There are twists and unpredictable moments making this book more interesting. After finishing the story, I think that it definitely deserves a try.