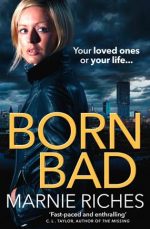 Today I have a great pleasure to welcome one of my favourite crime writers ever, Marnie Riches. She made a big BOOM with the series #TheGirlWho. Now, she is back with another book, something different than The George McKenzie Series. Born Bad was born on March 9-th, gritty, gripping journey through Manchester’s meanest streets. A must-read for all fans of Martina Cole & Kimberley Chambers, Born Bad has already been nominated for a CWA Ian Fleming Steel Dagger!
In meantime, read the extract from this amazing book of hers and don’t forget to visit all the amazing bloggers who hosted this blog tour. 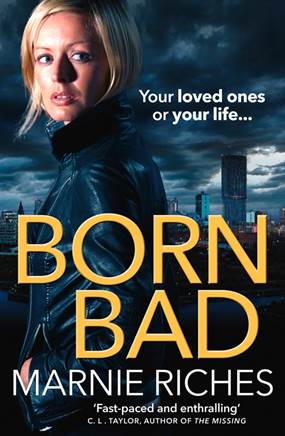 The battle is on…When gang leader Paddy O’Brien is stabbed in his brother’s famous nightclub, Manchester’s criminal underworld is shaken to the core. Tensions are running high, and as the body count begins to grow, the O’Brien family must face a tough decision – sell their side of the city to the infamous Boddlington gang or stick it out and risk losing their king.But war comes easy to the bad boys, and they won’t go down without a fight. So begins a fierce battle for the South Side, with the leading Manchester gangsters taking the law into their own hands – but only the strongest will survive…

You can find Marnie Riches HERE.

Gloria Bell was finding it hard to praise Jesus that Sunday in the Good Life Baptist Church. Her bunions were stinging for a start. She looked down at her feet, grimacing at the protrusions through the brown patent leather. Perhaps the Lord was punishing her for vanity. There had been no real need to wear heels, if she was being honest. Flats would have been a more sensible choice, even though she was wearing her new best summer dress and matching shrug. But in her heart of hearts, Gloria admitted that she quite liked the way the pastor looked at her legs when she was wearing these heels. And maybe Jesus would appreciate her suffering and self-sacrifice to brighten His servant’s Sunday morning spiritual travails with a nicely turned ankle. The pastor did put an awful lot of passion into his sermon and singing, after all. That had to be tiring.

‘He’s got great stamina,’ her friend Winnie whispered in her ear, almost taking Gloria’s eye out with the sharp petrol-coloured feathers that protruded from her best hat.

Gloria nodded, never taking her eyes off the pastor’s shapely, muscular bottom in those too tight suit trousers he wore. Whipping the choir into a frenzy was hot work. Ordinarily, Gloria liked it when he took his jacket off and turned his back to the congregation. But today, she was distracted by her infernal bunions and by the conversation she had had only yesterday with Sheila O’Brien.

They had been sitting at Sheila’s breakfast bar: she, drinking a simple mug of boiled water, Sheila, guzzling a vodka tonic. The call that had precipitated the visit had felt like a summons, judging by the frost in Sheila’s normally warm voice. Small wonder, then, that her one-time boss turned business partner had delivered a body-blow she could never have anticipated.

‘It’s over, Gloria,’ Sheila had said. ‘Our business. I’ve got to jack it in. Me and Pad are moving to Thailand. I’m so sorry.’

Gloria had set her mug carefully back on its coaster and studied Sheila’s serious expression. Her eyes were clear, despite the early V&T. She’d looked at her hands to see if she had the shakes. But the myriad of platinum charms on her ostentatious bracelet always rattled; it was hard to tell. ‘Are you drunk?’

Sheila had sighed. Her white skin, normally warmed with spray tan and cosmetics, had looked wan that morning, giving her a flat, defeated look. A developing bruise beneath the skin on her forehead had been evident. ‘I wish I was. We’re selling up. It’s all decided. ’Cos of his heart attack.’

Pressing her hands to her mouth, Gloria had shaken her head. Visualising the Nigerian women from the church whose families back home were all dependent on their cleaning business for income. What would she tell them? How could she look any of them in the eye? And the girls in the flat … The illegals.

‘We’re responsible for over a hundred women, Sheila,’ Gloria had said, folding her arms and feeling the Lord’s righteous indignation puff a little wind back into her sails. ‘I’m a respected figure in my community.’ She poked herself in the chest with an honest, unpolished, work-worn finger.

‘I know. Look, I said I was sorry. What can I do?’ Sheila had held her hands up, as though this somehow absolved her of any guilt for dismantling Gloria’s hopes and dreams – carefully built into something edifying and impressive over many years – in under twenty minutes.

‘Can’t you sell me my share of the business?’ she had asked, mentally calculating how much she would get if she remortgaged her modest Chorlton semi and sold her beloved Mazda MX-5. ‘We were just on the cusp of doing really well, Sheila. You know we were.’

‘No.’ Sheila had shaken her head. ‘Paddy wants a clean break. I don’t want any trouble following me to Thailand. It’s not like selling a proper business. We run a bent cleaning agency, Gloria. I can’t let you take the reins for something I set up. If it goes tits up and you get your collar felt, it will come back to me.’

In an ungodly way, Gloria had found herself balling her fist and wanting to make contact with Sheila’s Botoxed forehead. What would Jesus do, Gloria? The meek inherit the earth. Take a deep breath like the pastor advised. Be better than your animal impulses. She had hidden her fist beneath the worktop. Had barely been able to get the words out, her mouth had been so tight. ‘We’ve got girls in their teens from Benin City that we rescued from those heathens in Birmingham. Remember? They’d shaved off the poor mites’ intimate hair and told them they’d cast spells so they’d die painful deaths if they didn’t cavort with dirty old men. Those girls had been beaten and burnt and thrown out of moving cars. But we made them safe! We gave them jobs! How can you turn round now and tell them they’ve got to go back to the hell they were living before?’

‘Look. I don’t like this any more than you do.’ Sheila had stood and trotted to the large Maytag fridge–freezer. Poured herself another vodka and dropped three ice cubes into the glass with a merry plink. Fizzing tonic making that kitchen sound like a cheerful place, with its super-modern chandeliers and its shining surfaces.

‘Then, name me a price!’ Gloria’s fist had had a life of its own, thumping the granite worktop. She had gazed at it, alarmed at the pain that had ricocheted up her arm. Refocused on her business partner. ‘I bet Paddy’s selling his blasted enterprises. I bet he’s not giving his life’s work up, as though the O’Brien empire had never existed. Eh? Am I right?’

‘Oh, so I am right. He gets to sell. But let me guess. He ordered you to just walk away from the lot, because anything we’ve done as women counts for nothing. Is that it? Have I hit the nail on the head?’

Sitting on that hard pew in the church next to old Winnie, Gloria remembered with dyspeptic discomfort how she had left the O’Briens’ Bramshott mansion, feeling like a member of the domestic staff who had been summarily dismissed after being caught stealing the silverware. Exacerbated by the knowledge that she had, in fact, started out as Sheila’s cleaner, all those years ago.