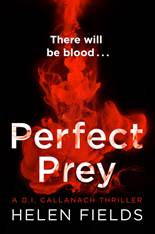 Hello! It is a new day and a new blog tour! Today I’m taking part in Helen Fields’ blog tour for the new release, Perfect Prey and I am so excited! After her first book Perfect Remains, I got hooked on her books. This one is the second one in the D.I.Callanach Series and it was published just a couple of days ago, on July 27-th. It is my pleasure to have a wonderful piece of the story on the blog which I hope you’ll enjoy. Stay tuned for the review coming these days. Massive thanks to Sabah from Harpercollins.co.uk  for the chance to be part of the blog tour.

The second in the terrifying DI Callanach crime series. Fans of M.J. Arlidge will be hooked from the very first page.

In the midst of a rock festival, a charity worker is sliced across the stomach. He dies minutes later. In a crowd of thousands, no one saw his attacker. The following week, the body of a primary school teacher is found in a dumpster in an Edinburgh alley, strangled with her own woollen scarf.

DI Ava Turner and DI Luc Callanach have no motive and no leads – until around the city, graffitied on buildings, words appear describing each victim.It’s only when they realise the words are appearing before rather than after the murders, that they understand the killer is announcing his next victim…and the more innocent the better.

Ava was dealing with a terrible case, Callanach thought. Close-up police work, dealing with levels of extreme brutality, could be too much for anyone. He pretended to be busy looking through the Sim Thorburn autopsy photos that Ailsa had left for him, but studied Ava peripherally. She was tired and not herself. Her best friend Natasha was away, spending a semester at a university in the States as a guest lecturer. Ava didn’t have her usual support network available and Callanach had been too distracted to notice. If he was honest with himself, avoiding Ava might be closer to the truth. He waited until Ailsa left.

‘We still haven’t christened that fishing rod you gave me,’ Callanach said. ‘When this is over and you and I finally get some time off, how about I take you up on your offer of showing me the lochs?’

‘I understand,’ Callanach said. ‘Then how about a movie tonight? We could both do with thinking about something else for a while.’

A figure appeared beside them. Callanach hadn’t been aware of being watched whilst he’d been talking to Ava, but DCI Joe Edgar had obviously caught the gist of their conversation.

‘That’s nice. Always good to see work colleagues supporting each other. I’m afraid Ava and I are having dinner with her parents tonight though. I haven’t seen Percy and Miranda for years. Can’t wait to tell them what I’ve been up to,’ Edgar said. ‘And I’ve moved that young DC of yours over to my incident room. He’ll do better mixing with my team full-time. He’ll have to buck up though. We keep pretty high standards. Hope it won’t be too much of a shock for him.’

‘He’ll be fine,’ Callanach said, a tiny muscle at the corner of his lower jaw flexing. ‘You shouldn’t underestimate Tripp.’

‘Good, we need them bright and on the ball for the stuff we have to deal with. See you later, darling,’ he said, giving Ava a pat on the shoulder. ‘Callanach,’ he nodded on his way out.

Callanach shoved his hands in his pockets and took a deep breath as he watched Edgar leave.

‘Dinner with your parents? Thought you couldn’t stand that sort of thing. Or them, for that matter.’

‘What the hell would you know about me and my parents? God, could you just not comment? For once? You know, Luc, you’re the most closed-off person I’ve ever met and you’re lecturing me on my family relationships. You’ve got some nerve.’ She paused, staring at him. ‘I’ve got work to do.’

Callanach stood still until she’d walked round a corner. Keeping a steady smile on his face and his pace measured, he went back to his office and shut his door. Then he slammed one foot hard into the base of his desk. The wood splintered. His toes ached. He grabbed his coat and headed out into the city.