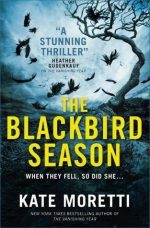 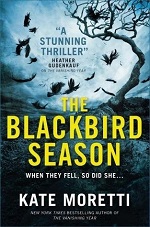 Where did they come from? Why did they fall? The question would be asked a thousand times....Until, of course, more important questions arose, at which time everyone promptly forgot that a thousand birds fell on the town of Mount Oanoke at all.

In a quiet Pennsylvania town, a thousand dead starlings fall onto a high school baseball field, unleashing a horrifying and unexpected chain of events that will rock the close-knit community.

Beloved baseball coach and teacher Nate Winters and his wife, Alicia, are well respected throughout town. That is until one of the many reporters investigating the bizarre bird phenomenon catches Nate embracing a wayward student, Lucia Hamm, in front of a sleazy motel. Lucia soon buoys the scandal by claiming that she and Nate are engaged in an affair, throwing the town into an uproar...and leaving Alicia to wonder if her husband has a second life.

And when Lucia suddenly disappears, the police have only one suspect: Nate.

Nate's coworker and sole supporter, Bridget Harris, Lucia's creative writing teacher, is determined to prove his innocence. She has Lucia's class journal, and while some of the entries appear particularly damning to Nate's case, others just don't add up. Bridget knows the key to Nate's exoneration and the truth of Lucia's disappearance lie within the walls of the school and in the pages of that journal.

It is the first day of May and I hope you are having a great time. Today is International Worker’s Day and many are spending the day outside in the nature with the families. But, before hitting the road to the wild, I have a review for you. The Blackbird Season was on my TBR list for a very long time and finally I have managed to read and review it. I loved Kate Moretti’s The Vanishing Year and this psychological thriller of hers is not an exception. Let me tell you something about the book.

In a small town in Pennsylvania, strange things start to happen. First, the birds. They are falling dead out of nowhere. Many connect the dead birds with the mill in the town, but the mill is closed. So what is killing the birds?

Nate Winters is a teacher in the local school and the students adore him. He treats every student like his own child and everyone has his private phone number. But, when a reporter comes to investigate the suspicious death of the birds, she finds out something else. A new rumor starts, Nate having an affair with a student in a motel. And then, people start to talk. Nate is convicted without any evidence. He can see it in people’s eyes.

Suddenly, Lucia, the student Nate was supposedly having affair with, is missing. Couple of days later, she is found dead in the mill. And, Nate doesn’t have an alibi for her time of death. And no one believes him, not even his own wife, who finds Lucia’s photo on his phone.

Was it Nate? Was he trying to cover his affair? Was he having an affair at all?

Or was it his wife Alicia? Was she trying to save her marriage? Was she jealous of him spending his time with the students instead of their autistic son?

Or was it Lucia’s abusive family that she was trying to escape from?

At first, it was hard for me to get into the story. There are few characters and every one of them has his/her own story. All of them have their own point of view. Nate, Alicia, Lucia, Bridget. Destroyed dreams, broken hearts, hopes for better future that burst like a soap bubbles. The author portrayed each character with lots of emotions, lots of wounds, lots of emotional pain. I could peek into the mind and soul of every character and easily understand why they do the things they do. When I finally managed to get into the story, I couldn’t put the book down. I wanted to find out what the hell was going on. It was like a Twin Peaks story, a mystery surrounded with the surreal. So if you are a fan of Twin Peaks, or, you simply like psychological thrillers set in the country, this is a read for you.