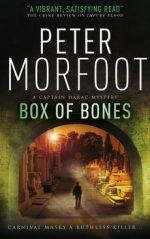 It is Carnival time in Nice, and for three weeks the boulevards are alive with dancers, jugglers and musicians. Amidst the colour and pageantry, Captain Paul Darac of the Brigade Criminelle is investigating a series of suspicious deaths. He and his team reopen a closed case that may provide new insights, but their own lives are in danger as they uncover a story of terrifying ambition and betrayal.

I hope you are having a great week. The summer is hitting on and the time is perfect for chilling in  some cool place with a good book. Today I have another review for you, a French mystery set up in Nice. I love Nice. I had a great time there couple of years ago. That’s why I was so delighted to read a mystery set in this beautiful city. Here are my thoughts.

It is the time of the Carnival in Nice, the streets are full of people. There is shooting at the graveyard. A man has been killed. Captain Paul Darac of the Brigade Criminelle is investigating the case. It is not just the shooting suspicious but also the grave where it happens. It belongs to a young woman who dies of a very rare genetic disease. Following the disease, the police  are tracking her family. What’s more interesting, the father of the woman just comes out of prison, for the robbery of the century. A bank has been robbed couple of years ago and the money was never found. Only one person took the blame and there was a whole team who did it. When another person dies connected with the robbery, it is more than obvious that it is all about the money. But is it the money or revenge? And who is going to die next? In order to solve a murder, Captain Darac and his team reopen a closed case. Can they stop the murders?  People are dying. In the same time, Captain’s guitar has been stolen and his widowed father is getting married. Problems everywhere.

Box of Bones is my first book of Captain Darac’s mystery. It is the third in the series, but it can perfectly stand alone. It has murders, mystery, robbery, humor. And it is set in France. It is something different from the ordinary. I liked it and really enjoyed while reading it. It took me a while to get into the story at the beginning, but I had a great time as the story continued. It is an interesting read. If you are a fan of French mysteries, it is a perfect read for you.