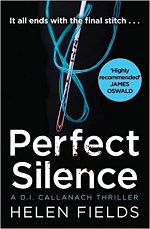 It’s a bright sunny day here and I hope you are having a great time. Today I have the pleasure to take part in Helen Fields’ blog tour for her latest gripping thriller, PERFECT SILENCE. It was published on August 23-rd. Today I have an exclusive extract from the book just for you. I must say that I absolutely love D.I.Callanach Series and the book number four certainly doesn’t lack my appreciation. You can read my review here. Many thanks to lovely Sabah and the amazing team at Avon for the chance to be part of this blog tour.

When silence falls, who will hear their screams?

The body of a young girl is found dumped on the roadside on the outskirts of Edinburgh. When pathologists examine the remains, they make a gruesome discovery: the silhouette of a doll carved in the victim’s skin. And when a macabre ragdoll is found nestled beside an abandoned baby, DI Luc Callanch learns the killer’s horrifying game plan – cutting out dolls from the flesh of his victims.

When a series of drug-users are brutally branded with the letter Z slashed into their foreheads, Luc and his partner Ava must risk both their jobs and their lives to unearth the truth. Is this the merciless work of the same assailant?

As the killer’s twisted games persist, Luc knows it’s only a matter of time before he strikes again. Can they stop another victim from being silenced forever – or is it already too late?

‘My remit is science

, not speculation. It’s a wonder she

survived as long as she did. She was tough and brave. To have

crawled at all, even just a few metres was, in the circumstances,

‘How long since she died, do you think?’ Ava asked him.

‘Three to four hours. Apparently, she was found by a farmhand

the lane. I saw him talking to the first officers on the scene.

Given that he’s being treated for shock himself, I’d say he’s

nothing to do with it. The pathology aside, it took someone

with a strong stomach to take a knife to this girl, then to turn

her over and do it again. It’s not like stabbing in anger. It takes

medically trained professionals a long time to prepare themselves

‘A psychopath, then,’ Ava said. ‘Or someone completely

inured to the extremes of violence and bloodshed.’

‘Someone you shouldn’t underestimate, I think I’d say,’ Jonty

morning for some answers.’

They said their goodbyes. Luc and Ava stood watching as the

a stretcher. The ground where the young woman had died was

crimson in the centre and black at the edges. With the body

removed, the trail she had crawled was more obvious.

‘She didn’t get very far at all,’ Callanach said. ‘My guess is

that when she was left here, the perpetrator knew she wouldn’t

last much longer. I also think they drove away south west,