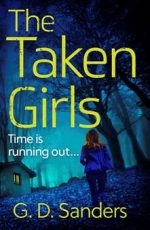 It’s snowing outside and I love snow!  I hope you are having a great time. Today I have the pleasure to take part in G.D.Sanders’ blog tour for latest gripping thriller, The Taken Girls. It was published on 13 December. Today I have an exclusive extract from the book just for you. Many thanks to lovely Sabah and the amazing team at Avon for the chance to be part of this blog tour. 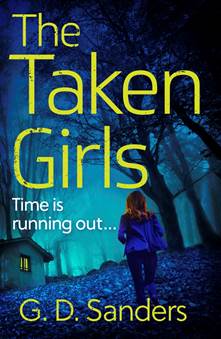 When a missing teenage girl reappears unharmed but pregnant, the case falls to DI Edina Ogborne, the newest recruit of Canterbury Police. But Ed’s already got her hands full with a team who don’t want her, an ex who won’t quit, and terrible guilt over a secret from her past.As Ed investigates the case, she discovers Canterbury has seen this crime not once, but several times before. And when Ed and her detectives encounter missing historic police files, falsified school records, and Ed’s new lover as a prime suspect, it becomes clear that the system has been corrupted.Can Ed find the kidnapper behind these depraved crimes before he strikes again? Or has time already run out?

Jenny put down her coffee cup and delivered her summary without once looking at her notes.

‘Lucy Naylor, 17 years old, from Hollowmede in Wincheap. The house is down the road from the local primary school. Lucy was reported missing by her parents at 22.57 last night, Friday, 15 June. Her friend, Deborah Shaxted, also 17, of Victoria Road, Wincheap, confirmed that Lucy had spent the evening with her. Lucy left Debbie’s house just after ten to walk home. Unfortunately, she never arrived. Her parents, Rachel and Simon Naylor, contacted Deborah’s parents around ten-thirty; Mrs Shaxted remembered the television news had just finished. Both fathers left their homes and walked between the houses, each taking one of the two routes Lucy would probably have followed to get home. They found no trace of the girl. At that point, Lucy’s father ran home and telephoned the police.’

Saunders interrupted, ‘What about boyfriends? In a case like this …’

‘Lucy’s parents said she didn’t have a boyfriend.’

Jenny took another mouthful of coffee and Nat Borrowdale, who had been visibly itching to speak, seized his chance.

‘Mr and Mrs Shaxted said the same and Debbie confirmed it. She said neither of them has a boyfriend.’

Saunders’s eyes flicked from Eastham to Borrowdale. ‘I assume you got a description and a recent photograph?’