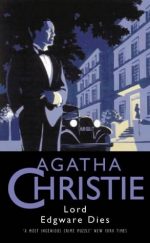 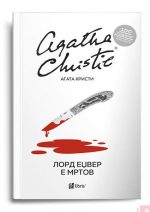 An Agatha Christie mystery story. Poirot had been present when Jane bragged of her plan to ‘get rid of’ her estranged husband. Now the monstrous man was dead. And yet the great Belgian detective couldn’t help feeling that he was being taken for a ride. After all, how could Jane have stabbed Lord Edgware to death in his library at exactly the same time she was seen dining with friends? And what could be her motive now that the aristocrat had finally granted her a divorce?

This time I am reviewing an Agatha Christie’s mystery novel, #9 in the series, Lord Edgware Dies or Thirteen at Dinner. Agatha Christie still is Queen of the Crime after so many years and one of my favourite writers of all the time.

Hercules Poirot is visited by a famous actress who needs his help. She wants a divorce from her husband, Lord Edgware, but she mentions that she would love to see him dead. The great detective doesn’t involve himself in marriage problems, but something about this case wakes up his curiosity. Together with his friend Hastings, they visit the lord, and soon after they leave, he is been murdered.

Was it his wife who wanted her freedom?

Was it his nephew who needed his money?

Was it his daughter, or the batler, or some complete stranger?

Hercules Poirot activates his grey cells to solve this murder. The rest of the story I leave to you.

I love Hercules Poirot Series. I have read most of the books and watched the entire tv show. I can never be tired of Hercules Poirot. I had a great time reading this book. I can never predict the culprit when is Agatha Christie in question, but it happens to me very often with the modern crime stories. She is a genius when it comes to writting whodunit novels. No one can beat her, not even after all this time.