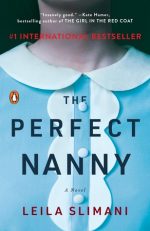 When Myriam, a French-Moroccan lawyer, decides to return to work after having children, she and her husband look for the perfect nanny for their two young children. They never dreamed they would find Louise: a quiet, polite, devoted woman who sings to the children, cleans the family's chic apartment in Paris's upscale tenth arrondissement, stays late without complaint, and hosts enviable kiddie parties. But as the couple and the nanny become more dependent on one another, jealousy, resentment, and suspicions mount, shattering the idyllic tableau

When a couple decides to hire a nanny for their children, they look for a woman who will be their childrens’ second mother. And they find the perfect Louise. She is ideal, she is perfect. She cooks, cleans, washes the dishes, irons. And most importantly, both children listen to her. They adore her. But there is a wolf under the sheepskin. When Louise realizes that she is no longer needed, she takes drastic measures. Decides to commit a murder. She kills the children. And that is how the story begins!

The Perfect Nanny is the story of a woman, one very lonely woman. Through the story and her life we see the bad side of modern living. Loneliness. We are surrounded by people, yet we are lonely. Louise is lonely. And the only cure for her loneliness she sees in being needed in the family she is paid to care for. Actually, she is paid to care for the children.

For a moment I tried to get into the psyche of the nanny, to understand why. And I didn’t understand. I didn’t understand how come you were trying to get rid of your own family in order for the other family to function. How come your own daughter was not receiving half the love other children you care for received? If she had no children, I would understand, but she had a daughter, Stephanie, and she deliberately broke up her own family to keep the other. Her need to be needed was greater than her love for children. And that need brought her to the egde of madness, to make her do the most terrible thing.

The author also deals with the topic of careerism, superficiality, wealth, immigration. A realistic and modern side of modern society. The struggle for survival. Miriam fights for survival. She considers that if she remains to be a housewife, she cannot prove herself intelectually. The office becomes a sanctuary for her where she spends more and more time. Wafa fights for survival. She goes through hell to get to France and have an opportunity to earn for a decent living. Louise fights for survival. No one is looking for her, no one is missing her. And that makes her invisible. And she can’t stand that.

Leila Slimani is a new author for me and I have to admit, she has a really interesting writing style. She drags you slowly, adds tension to the story and literary forces you to keep reading. And suddenly, end! Damn, she cuts you when it is the most interesting part! And ??? I don’t know if that’s just my opinion, but to me the story seemed to be unfinished. That’s the only negative thing I found. Otherwise, it is a solid psychological thriller, a tense story, makes you think a little about the life around you. I recommend!