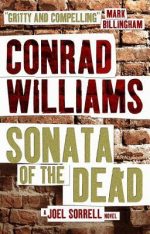 Copy provided by the publisher in exchange for an honest review.
Conrad Williams is a brand new author to me, and when I started reading his book, I didn’t know what to expect. This is his second book in the series but definitely can stand alone.
The main character is Joel Sorell, a private investigator who is still recovering from the physical and emotional injuries in the past. He hasn’t seen his daughter for years, not knowing if she is missing or she is just running away from him.
The story starts with a murder, very brutal murder. But what is very unusual and out of ordinary, is the dead man’s surrounding. Pages of typewritten text covered with blood and explicit photos of a young woman. A woman who is missing. Joel Sorrell’s daughter. The detective who is in charge of the case recognises Sorrell’s daughter on the photos and contacts him. But Sorrell is definitely not in charge of the case. So, the private investigator starts his own research to find the killer and most important to him, to find his daughter. The investigation takes him to the members of an underground group called The Accelerants, people who might be musicians, writers, or killer’s next victims. Or murderers.
As I mentioned previously, this is my first book from this author. His main character, Joel Sorrell, is a real anti-hero. He doesn’t care because of the murders, nor the victims, but his own daughter. He tries to calm down his consciousness, doesn’t want to think that he’s been a lousy father. The whole story didn’t disappoint me, but also didn’t impress me very much. The thriller part is done properly and overall the story is ok. But the beginning was far more interesting than the ending, and that’s why I am rating it with three and half stars.
My opinion: 3,5 / 5.
About the author
About the publisher
0 shares