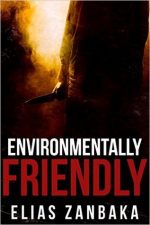 Copy provided by the author in exchange for an honest review.
In the story, we meet Sergeant Schaefer, a former soldier. A person who decides to take a weapon in his arms and declare war, to mother nature. It is very obvious that he is suffering from post-traumatic stress disorder. He has been in a psychiatric hospital for a while and he has escaped from there. He sees his enemies everywhere. Anyone is his enemy.
With a weapon in his hands, Sergeant Schaefer is a threat to the others. Surrounded by the police force, he is caught in the trap. But only one man believes him. Only one one man knows how he really feels….
When I was accepted to review this short story, I had no idea what to expect. It seemed like an interesting and thrilling short story. Adrenalin-packed, it reminded me a little bit of the story for Rambo. Too bad it was only a short story. I really think that it would be a great novel. Short stories always seem to me little bit unfinished. It took me for a while to figure out what was really going on in Schaefer’s head, but then I felt really sorry for the guy.
Overall, it is a little bit different than the books I read. It is well written, an adrenaline-packed short story that won’t take you more than half hour of your time. It definitely deserves a try.
My opinion; 4 / 5.
0 shares