For five years, crime-thriller author Frank Westworth has been living with killers, the fictional characters who populate his gritty thrillers.
Undercover operatives, hard as nails hitmen, ice cold contract killers, manipulated men and bewildering women: they’ve all been a part of his daily life.

Today, Thursday 12 May, Frank is letting these dangerous people loose – in the nicest possible way – upon the population of Porlock, normally known for its easy access to the rolling hills of Exmoor’s National Park.
Frank will read a short excerpt from one of his books to introduce the audience to his characters and the complex world they inhabit, and then explore the murky depths of thriller writing and criminal minds. Where do these strange people, their snappy dialogue and their dangerous tales come from?
Surely it’s all invented? Maybe it’s not…
Entry to the event is free and refreshments will be provided (donations to the library would be appreciated). Frank will be signing copies of his paperbacks, and all who attend will be entitled to claim one of Frank’s quick thriller ebooks. 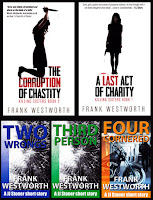 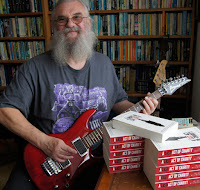 Frank Westworth is the author of the Killing Sisters novels, available in paperback and as ebooks, and the JJ Stoner short stories. ‘A Last Act Of Charity’ was selected by crime genre guru Maxim Jakubowski as one of his recommended reads of the year, and was shortlisted as one of the Best Independent Books list of 2014.
Frank shares several characteristics with JJ Stoner: they both play mean blues guitar and ride Harley-Davidson motorcycles. Unlike Stoner, Frank hasn’t deliberately killed anyone. Instead, he edits a classic motorcycle magazine and lives in North Cornwall, together with his partner and an unusual group of ‘imaginary friends.’
See www.amazon.co.uk/Frank-Westworth/e/B001K89ITA/ 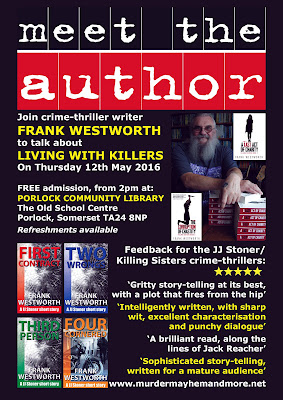